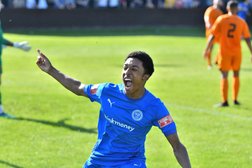 “A DRAW WAS A FAIR RESULT” By Garry Clarke

“Disappointed not to win, but a draw was a fair result”, the words of Warrington Rylands manager Dave McNabb after seeing his side twice surrender the lead at Prescot.

Having won both their opening NPL West games Rylands got off to a flying start in the Hope Street sun scoring twice in the opening 12 minutes.

Rylands broke the deadlock in the 8th minute, Ste Milne raced away from the defence to deliver a cross from the ring wing which was out of the Cables keeper’s reach but perfectly placed for Callum Dolan to guide into the net.

Four minutes later their advantage was doubled. Joe Coveney floated a free kick into the Cables penalty area finding Rick Smith unmarked at the far post. The centre back took a touch before smashing the ball into the back of the net.

With their confidence growing the home side started to force their way back into the game as it descended into a scrappy affair with too many passes from both side going astray.

Prescot pulled a goal back in the 23rd minute when Alex McMilan sent Rylands goalkeeper Graeme McCall the wrong way from the spot. McMilan had been awarded the spot kick by referee Matthew Young when he went down in the box under a challenge from Mike Simpson.

Both sides had further chances to score before half time as play switched from end to end without causing the scorers any further trouble. Rylands best chances falling to Owen Robinson whose shot hit the side netting and Joe Denman whose header from a Coveney free kick was blocked on the line and scrambled away.

Four minutes into the second half former Rylands player Lewis Buckley had a shot cleared off the line, while for Rylands Hughes twice went close, having a header saved and a shot blocked before the home side equalized in the 65th minute. Rylands were unable to clear the ball from their penalty area allowing it to fall to McMilan who lifted over McCall and it to the net for his second goal of the afternoon.

A 70th double substitution paid immediate dividends for Rylands as Adam Buxton and Kane Drummond combined to restore the Blues lead. A Buxton cross caused confusion in the Prescot ranks, and while they hesitated, Drummond reacted and with his first touch of the ball headed home from close range.

Cables were back on level terms in the 84th minute. A corner swung into the Rylands six yard box, in the goalmouth scramble which followed the ball ended up in the back of the net. Lloyd Dean the credited goal scorer.

In the dying minutes of what had been an open entertaining encounter both sides had chances to snatch a win but in the words of McNabb “a draw was a fair result.”