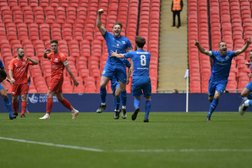 With the nation watching live on BT Sport, Warrington Rylands once again made history as they lifted the FA Vase at Wembley Stadium after a 3-2 win over Binfield FC.

Despite the tough competition from Binfield, a dream come true hattrick and man of the match performance from Elliott Nevitt was enough to secure the Blues the biggest win in their 115-year history.

After a tense opening, Rylands got their first chance of the game when Ste Milne burst down the right-hand side in the 7th minute, he put a dangerous ball into the box, but the cross was just too heavy to find Elliott Nevitt at the back post.

In the 22nd minute the Blues thought they had opened the scoring. Rick Smith made a powerful run through the middle of the park and sent Ste Milne through on goal. Milne rounded the goalkeeper and calmly slotted home but was flagged offside.

After the close call, it wasn’t long before Rylands broke the deadlock. In the 25th minute, Joe Coveney got on the end of Kane Drummond’s cross, flicking the ball towards Elliott Nevitt at the back post who expertly volleyed home to give Rylands the lead.

The next period of the game was tense and after the 42nd minute the scores were all level again. Sean Moore did well on the left-hand side and his cross found Liam Ferdinand who headed home.

However, despite the setback David McNabb’s side responded in the best way possible. Rylands were straight back on the attack and were back ahead just a minute later. Charlie Doyle made a great run into the penalty area and was brought down by Liam Gavin, earning a penalty. Elliot Nevitt stepped up and fired the ball into the bottom right corner to make it 2-1 to Rylands.

Rylands carried their momentum from the first half into the second and were able to extend their lead in the 59th minute. An expertly delivered corner from Joe Coveney found the head of Elliott Nevitt, who nodded home his third goal of the game, giving Rylands a 3-1 lead and securing himself a dream come true hattrick in the national stadium.

Despite Rylands gaining a two-goal lead, Binfield responded well and came extremely close to getting a goal back in the 64th minute. A cross towards the back post forced an excellent save from Graeme McCall at point blank range, the ball then fell to a Binfield attacker, but Warren Gerrard was able to clear off the line.

Just minutes later, Binfield found the goal they were looking for. Liam Ferdinand’s shot from the edge of the box went through the legs of Rick Smith and found the bottom corner to bring the score line to 3-2.

The final stage of the game was extremely tense for David McNabb’s side. Binfield threw everything they could at the Rylands back line, but they couldn’t break through. Captain Gary Kenny was exceptional as always, winning everything in sight to help retain his side’s lead.

Nevitt had a chance to seal it for Rylands and get his fourth of the game in stoppage time after Rylands caught Binfield on the break, but Chris Grace pulled off an excellent save to keep his side in the game.

However, despite the pressure the Blues held their nerve and kept Binfield at bay until the referee brought matters to a close.

The win sees Rylands become FA Vase champions for the first time in their history. After joining the non-league pyramid just three years ago, the win is a monumental step in the club’s progress and is something that David McNabb and everyone else involved should be extremely proud of.