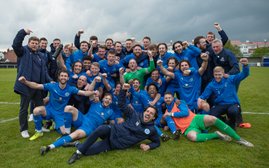 RYLANDS PUNCH THEIR TICKET TO WEMBLEY

"It's a 50/50 game and Binfield are a fantastic side. We'll prepare right, and make sure the lads have every opportunity to go and perform".
Manager David McNabb on final against Binfield FC

In the Semi Final of the FA Vase, Warrington Rylands made history with a 2-1 win which booked their place in the final of the competition set to take place at Wembley Stadium next week.

Despite Walsall Wood pulling one back late on, goals from Kane Drummond and Elliot Nevitt secured the Blues the biggest win in the club’s history.

David McNabb’s side endured a shaky start to the game as the Wood’s John Atherton went through on goal after dispossessing Charlie Doyle in midfield in the 6th minute of the game. However, Graeme McCall was quick on his feet and produced an excellent save to parry the ball out for a corner.

After the nervy start, the Blues responded well, beginning to play their way into the game before being rewarded for their efforts after 25 minutes.

Ste Milne got on the end of a long ball from the back to expertly lay off Andy Scarisbrick, who was able to send Kane Drummond through on goal after a powerful run through the middle of the park. Drummond took the ball round the goalkeeper and calmly slotted home to give Rylands the lead.

Ste Milne put in a dangerous ball across goal from the right-hand side of the penalty area, but James Wren produced a good piece of goalkeeping to get there just before Elliot Nevitt.

As the second half kicked off, the Blues picked up where they had left off in the first half and continued to search for a second goal.

Elliot Nevitt was looking dangerous yet again and came close when his powerful shot from the edge of the box hit the side netting.

Rylands looked intent on extending their lead and in the 52nd minute they did just that.

Ste Milne was brought down in the penalty area after turning the Walsall defender to earn the Blues a penalty, Elliot Nevitt stepped up and smashed the ball down the left side of the goal to extend their lead.

After the Blues doubled their lead, it looked like any team could score next. Elliot Nevitt went through on goal in the 62nd minute and produced an excellent save from James Wren.

The Woods came close soon after when a rebound fell for their forward, but Warren Gerrard produced any excellent challenge to keep the game at 2-0.

However, Rylands didn’t sit back and looked to put the game to bed. Kane Drummond nearly finished the game off in the 78th minute, after winning the ball back from the Walsall Woods defence. However, his left footed effort from the edge of the box went just wide.

Despite the Blues being in control for the final stages of the game, the Woods were able to pull back a goal in injury time. Graeme McCall had no chance as a curling effort from the edge of the box flew into the top corner to make it 2-1.

Cementing their place in the history books

A nervy couple of minutes followed for David McNabb’s side, but they kept their nerve and kept the Woods at bay until the referee brought matters to a close.

The win sees Rylands make it into the final of the FA Vase for the first time in the club’s history.

They will make the trip to Wembley next week on Saturday the 22nd of May .