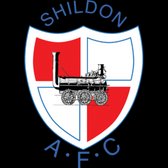 Having reached the last 32 of the competition before it was halted in December; Warrington Rylands 1906 resume their 2020/21 Buildbase FA Vase campaign by making the 109 mile trip to the North East to face Shildon AFC in the fourth round on Saturday 17th April at 3pm.

Who are Shildon AFC?

Originally formed in 1890, the club known as the Railwaymen hail from the town of Shildon, situated 2 miles south east of Bishop Auckland and 11 miles north of Darlington in County Durham.

They joined the Northern League in 1933 and have been champions six times, their last title coming five years ago in 2016.

They have since been one of the league’s more consistent sides, and if the planned league restructure takes place this summer, Shildon will be in line for promotion due to boasting the third best playing record in the Northern League over the past two shortened seasons.

Sitting 2nd in the table when the 2019/20 season was abandoned, Shildon were in 8th place when the current campaign was halted and curtailed having taken 21 points from eleven games. Their last league fixture was a 1-1 draw at Ryhope CW on 27th October.

Quarter finalists in 2010 and semi finalists in 2013, this season is the second time Shildon have reached the fourth round in the past five seasons, their last appearance at this stage resulted in a 4-1 home defeat against NWCFL Atherton Collieries.

Shildon have played NWCFL opponents 16 times in the FA vase and have a 50% success rate having won 8 times and lost 8 times.

Managed by former Mansfield Town defender Daniel Moore since January 2017, Shildon, who play in a kit of red and white, will host Warrington Rylands at their 4,700 capacity Dean Street ground situated close to the town centre.

With the game being played behind closed doors due to government COVID-19 restrictions, Shildon will be streaming the game live on YouTube (Only available in the UK).

To help with covering the costs they will be charging £4 to watch the stream and you will also receive a virtual programme for the game.

Full details of the club can be found on www.shildonafc.com