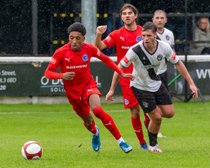 After a run of two games without a win Warrington Rylands laid down a marker to the rest of the division by returning to winning ways as they won 3-0 at league leaders Mossley.

Mossley, who had gone top of the table in mid week, started brightly but were soon on the back foot as Rylands playing downhill at a wet and windy Seel Park quickly gained control.

Owen Robinson fired a shot just wide of the Mossley goal in the 12th minute, before Kane Drummond had a goal disallowed two minutes later being ruled offside when he ran onto a Matty Hughes pass.

Joe Coveney opened the scoring in the 20th minute converting from the penalty spot after Declan Evans had clipped Drummond’s heels.

Mossley tried to hit back with Harry Pratt drawing a good save from Rylands goalkeeper Graeme McCall in the 22nd minute and eight minutes later the same player was inches off target with a shot from outside the area.

Rylands doubled their advantage in the 32nd minute. Mossley only half cleared a corner allowing Robinson to collect the ball, jink his way past a couple of defenders and curl the ball into the bottom far corner of the net.

A couple of minutes later Mossley goalkeeper Dale Latham clawed away an in swinging free kick from underneath his cross bar, he followed that up by palming a Rick Smith header over the bar and on the stoke of half time tipped a Hughes shot over the bar.

In the first minute of the second half Mossley captain Andy Keogh met a corner at the near post with his head to guide the ball into the back of the Rylands net. However, the match officials ruled from the corner kick the ball had gone out of play before arcing back into the field and disallowed the goal.

Mossley, determined not to surrender top spot in the table, dominated the second half committing more men to their attack as they searched for a way back into the game, while Rylands worked hard to keep them out with desperate defenders throwing their bodies in the way of goal bound shots.

Levi Phillips fired a shot across the face of Rylands goal, Anthony Brown had a shot cleared off the line in a goal mouth scramble, Pratt hooked a shot over the bar and McCall pulled off several good stops as the red line held firm.

With Mossley pushing more and more players forward gaps were being left at the back for Rylands to exploit on the break. Drummond and Robinson combined on the hour mark to set up Robinson whose shot was well saved by Latham.
Catching Mossley on the break, Rylands made the game safe in the 79th minute. Charlie Doyle fed Elliott Morris who raced clear of the trailing white shirted defenders, Latham pulled off a fine save to keep out Morris’s shot but could only parry the ball into the path of Doyle who fired it into an empty net.

The win lifts Warrington Rylands up to 5th in the table and back in the promotion play off spots ahead of Tuesday’s home game against Workington, who returned to the top of the table on Saturday, kick off 7.45pm