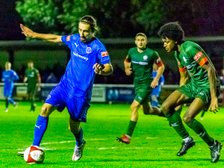 Having knocked Mossley off the top of the table on Saturday, Warrington Rylands defeated current NPL West leaders Workington at a wet and windy Gorsey Lane.

Two goals within three second half minutes proved decisive as Rylands inflicted a first league defeat of the season on Workington, but the three points did not come easy as Rylands moved up to 3rd in the table 4 points behind their vanquished opponents with a game in hand.

A strong wind driving heavy rain down the pitch made it difficult for both sides to play much football in the first half as they struggled to maintain control of the ball although both had chances to open the scoring.

After the initial feeling out process had been completed Workington’s Connor Gaul had a shot deflected wide for a corner, from which goalkeeper Graeme McCall made a great point blank save to tip the ball over the bar.

Despite playing into the wind Rylands started to get on top. Kane Drummond curled a dangerous cross into the Workington goalmouth which keeper James Atkinson did well to claim.

In the 25th minute a quick throw from Declan Walker was flicked into the penalty area by Matty Hughes, the ball fell to Drummond but his shot flew over the angle of the goal frame.

Five minutes before half time Drummond charged on to a through ball, holding off a defenders challenge he shot straight at Atkinson.

On the stroke of half time Workington forced a corner from which they had a shot blocked on the line before the rebound was fired over the bar.

A tight first half came to an end with the scores level but Rylands down two men, both Charlie Doyle and Hughes falling awkwardly in tackles suffering shoulder injuries.

With the wind and rain taking a rest, Workington started the first half on the front foot with Connor Tinnion curling a shot just over Rylands bar five minutes after the break. A few minutes later Rick Smith headed a corner half clear and reacted well to block the follow up shot.

Just after the hour mark Owen Robinson fed the ball to Callum Dolan who raced down the left flank, drawing the defence out to him, he slide the ball inside to Robinson who hit the ball first time to slot it past a helpless Atkinson to give the Blues the lead.

Three minutes later, Walker won the ball in midfield, his precision pass found Drummond who skipped around Atkinson to fire into an empty net.

Workington struck back five minutes later, a cross from the right wing found Steven Rigg unmarked at the far post where he headed home from close range to set a tense nervy final twenty minutes.

The final twenty minutes were played mainly in and around the Rylands penalty area as Workington bombarded the Rylands goal in an attempt to maintain their unbeaten record, however it was not to be as Rylands held firm. Bodies were thrown in the way of goal-bound shots, balls cleared off the line, great saves by the keeper, and a deserved three points in the bag.