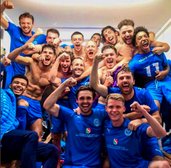 Football below the elite levels came to a shuddering halt for the second season in a row in January, when the Football Association suspended all play below the National League levels leaving thousands of players kicking nothing but their heels.

With their festive fixture falling foul of the weather, Warrington Rylands 1906 last took to the field on Saturday 19th December 2020 when they beat Longridge Town 2-1 in the 3rd round of the Buildbase FA Vase.

Their pre Christmas outing marked a significant milestone in the history of the long established club, it being their 100th game as a semi-professional team having been an amateur side for much of its long history.

The catalyst for the change came in 2012 when the struggling Cheshire League club was taken over by former player Paul Stretford, who unveiled ambitious plans for the club to join the professional ranks and eventually bring League football to the town.

Guarding the Rylands goal, and captaining the team in the absence of the normal skipper, in their “centenary” game against Longridge was Graeme McCall, one of the first signings made by the club when their status changed McCall was also between the sticks on 4th August 2018 when the Gorsey Lane outfit made its North West Counties League debut 100 games previously at Ellesmere Rangers.

Of the eleven players who kicked off Rylands adventure in the NWCFL with a 5-1 win in August 2018 - McCall, Tree, Williams, Kenny, Lownsborough, Sayer, Riley, Wolhuter, Bowers, Wellstead, McMillan – McCall was the only one on the field at kick off of the Longridge game. Although barring suspension he would have been joined on the field against Longridge by regular captain Gary Kenny who has led the side in the majority of the 100 games.

Despite being the only player to have played in games 1 and 100 McCall, of the 73 players to have pulled on a Rylands shirt during this time, is not the most capped players, that honour falls jointly to Warren Gerrard and Steve Wolhuter (now playing for Ashton Town) who have both played 84 times. McCall stands 4th on the list having played 77 games, Kenny is third with 82.

Having won 71 (incl. 4 penalty shoot outs) of the 100 games, Rylands have been prolific in front of goal netting 259 times. Topping the charts is Jay White who struck 30 times (59 appearances) before joining Ashton Town in November. Following closely behind with 28 goals in 44 appearances is current first team coach Stuart Wellstead, while third on the goal scorers list is Kane Drummond, who last year became the clubs first ever contracted player, with 23 from 44 games.

At the other end of the pitch, McCall, and his deputies, have played behind one of the league’s meanest defences only conceding 96 goals in the same period.

As they raise their bat to acknowledge their first century of games in semi-professional football, it seems an appropriate time to take look back and reflect on the progress the club has made over the past three years.

Three years ago the cash strapped club, founded in 1906 by workers from the Rylands Brothers Wire Works, were struggling in the lower reaches of the Cheshire League Premier Division but having been taken over six years earlier by former player Paul Stretford they had ambitions for the cash strapped club to play at a much higher level.

Continuing their good form into the 2019/20 season, Rylands stood 2nd on the Premier Division ladder on the cusp of promotion to the Northern Premier League when the Covid-19 pandemic brought the season to a shuddering halt, the Football Association declaring the season null and void.

Undeterred they returned for 2020/21 rebranded as Warrington Rylands 1906 Football Club.