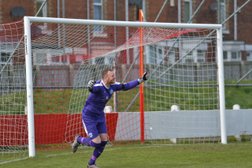 WHO YA GONNA McCALL – RYLANDS GOALKEEPER THE SPOT-KICK KING

"One thing I'll never take away from this group is the character and commitment that they have to fight for each other"
David McNabb, Manager

No one will be surprised any more; Graeme McCall is the hero of another penalty shootout, saving two spot kicks against Shildon AFC to send the Blues into the last 16 of the Buildbase FA Vase.

For the third time this season, Rylands have faced the torture of a penalty shootout at the end of a cup tie away from home. As happened at Whitby and Jarrow, they once again emerged victorious.

With the score locked at 4-4 after 5 penalties each, Conor Ready fired Rylands in front at the start of sudden death - setting the stage for McCall’s heroics. Star of the two previous penalty shootouts, McCall, having already saved Daniel Moore’s attempt, was once again the hero by keeping out Aiden Haywood's spot kick.

The previous ninety minutes of entertaining football had failed to separate two very evenly matched teams, although the home side was given a golden opportunity to break the deadlock in the 8th minute. Joe Denman’s clumsy challenge on Joe Posthill was deemed worthy of a penalty. As the Northern League side found out later in the afternoon, McCall is quite good at saving penalties, as he diverted Dean Thexton’s subsequent spot kick wide.

The home side edged the first half, and even had the ball in the Ryland’s net in the 20th minute, but Thexton’s effort from the edge of the area was ruled out due to a foul in the buildup. Heywood, Shildon’s right back, later rattled the Rylands woodwork with a fierce drive from outside the area, while his full back colleague Matty Robson drew a fine save from McCall with another strike from distance.

Rylands did create plenty of problems for their hosts by playing balls in behind their back line. Milne fired a shot just wide of the target, while Andy Scarisbrick flicked a glancing header from a Milne cross across the face of the goal.

After the break, play continued to flow from end to end, but neither side could make the breakthrough, with each being denied by desperate defending at either end of the Dean Street pitch as no one wanted to make the fatal mistake that would hand victory to their opponent.

Rylands thought they should have had a penalty themselves in the 64th minute, when Ste Milne was brought down from behind as he was about to shoot. To everyone’s surprise, referee Glenn Hart said no penalty and booked the Rylands target man for diving.

After their dramatic penalty shootout victory, Warrington Rylands' reward for winning at Shildon is a home tie in the 5th Round next Saturday, when they will play North Ferriby behind closed doors.

North Ferriby, who play in the Northern Counties East Division One, beat West Auckland Town 4-0 in their 4th round at home.