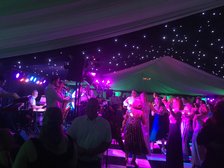 Another Successful SWRFC May Ball

Saturday saw Saffron Walden RFC's flagship Black Tie Ball at their ground at Henham where 200 revellers assembled for an end of season party under a large marquee erected on the pitches. Guests were treated to a 4 course meal as well as partaking in some fun fundraising events such as 'Heads & Tails'.
There was the traditional 'Auction of Promises' where guests could bid for prizes such as a weekend in Edinburgh to see some rugby or a day's sailing trip.
Live music was provided by a 9 piece band 'Revival' interspersed with a disco where dancing went into the early hours.
Chairman Ian McKernan announced that the club's ground at Henham has been renamed 'The Tiny Curtis Rugby Ground' after the club's former treasurer and stalwart Martin Tiny Curtis who had passed away last year.
Thanks must go to the main organisers: Dominic Russell, David Brewer and Dave Boreham as well as to the many bar, waiting staff and helpers who chipped in.
Share via
FacebookTwitter
https://www.swrfc.co.uk/news/a
Recent news