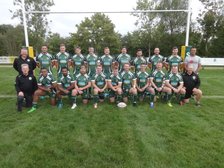 Another narrow defeat in terrible conditions.

The Bonus points keep coming just need to convert one to a W.

Away at Wanstead with Storm Dennis starting to kick in it was never going to be an easy game to play or watch!
However to both teams credit they created a close and tense game with Wanstead coming away with a narrow victory turning the tables on the reverse fixture at Walden in October.
Wanstead had the wind in the first half and scored a quick try after only 2 mins and then again after 23 mins, both wide out using the conditions and their forwards to good effect but with conversions extremely difficult were only 10 points up.
Walden narrowed the gap when several phases of play just inside the Wanstead half sucked in the defence, an overlap was created for the ball to go down the line for centre Adam Clarke to loop round receiving the final pass in space wide out on the right. He made it up to 10 mtres out was tackled but managed to drive over the line and get the ball down. 10 – 5 after 30 mins.
The home team managed one more score when the Ref missed a blatent knock on and Walden unfortunately stopped playing thinking they were going to be awarded the scrum but Wanstead carried on and scored wide out to leave the half time score at 15 – 5.
It did not take long for Walden to score in the second half as they attacked after some good kicks took them deep into the Wanstead half. They made some metres with some strong drives off first phase and then No8 Nik Baker spotted that there was no cover in front of a ruck, picked the ball up and burst through to run 20 metres to score. 15 -10.
Walden took the lead with 56 mins on the clock as they once again used the wind to get deep into Wanstead territory and front row Adam Smith bundled over near the posts to make the conversion easy for flyhalf Nick Dawson to get the extra 2 points and Walden were in front 15 – 17.
But Wanstead were not done and gained a penalty when Walden strayed offside, regaining the lead 18 – 17 and then straight from the kick off Walden missed a couple of tackles to allow the kick receiver to score under the posts to stretch the lead to 25 – 17. 69th minute.
But to Walden's credit they did not let their heads drop and 5 minutes later they forced Wanstead to give away a penalty 30 metres out and with the conditions getting worse elected to kick for the corner. From the resulting close range line out they set up a perfect driving maul that edged its way forward, with some backs joining in they gained momentum and drove over for their crucial 4th try and to get back within 3 points of victory 25 – 22 with 5 minutes left.
But it was not to be, Wanstead managed to control the rest of the game and when Walden conceded a penalty 20 metres out in front of the post they took the 3 points. The Referee blew the final whistle.
It felt like another win that slipped away but Walden have gained 2 bonus points for the second week running which may yet prove crucial at the end of the season.

Walden’s next game is home to Epping and Upper Clapham Sat 22nd Feb please come and support the team as it really makes a difference.