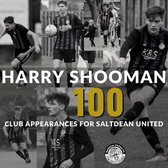 It was a very special day on Saturday 19th December as we celebrated 100 club appearances for defender Harry Shooman.

A fantastic player and key member of the team who has been with the Tigers since 2016/17 season. After a brief spell at Whitehawk earlier this season Harry is back and in great form scoring 5 goals in his last 8 games.

“Harry came to us four seasons ago after being recruited by previous first-team manager Damion Freeman. He was a young shy lad back then but has developed into a great footballer and is an ambassador for our club.

All the youth players love him, most of them have trained with him and come to watch him play. Everyone at the club thinks the world of him.”

Congratulations Harry on this brilliant achievement and we look forward to many more seasons with you!