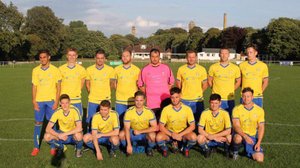 Salts FC vs Campion – A tale of two halves

Team: Bailey, Barraclough, Alexander, Hickey, Pleasance, Waterhouse, Lavery, Hartley, Boote, Hammond, Birchall
Subs: Magson, Boldy, Holland, Naylor
Goals: Hammond x 2
Yellow Cards: Alexander
Attendance: 52
Match Ratings
• Bailey - 5
• Barraclough – 5
• Alexander – 7
• Hickey – 6
• Pleasance – 7
• Waterhouse – 8
• Lavery – 5
• Hartley – 6
• Boote – 7
• Hammond – 8 MOTM
• Birchall – 6
• Boldy – 6
• Holland – 6
• Naylor – 7
Salts returned to action on Wednesday night following their dismantling of champions Lower Hopton, welcoming a new look Campion side to their riverside ground.
Salts were once again in a confident mood, with Bailey’s men in black (tracksuits) believing that three points was the only viable outcome.
Salts were without their talismanic number 10, Jonny Cunnington however doubts around star centre half Kane Alexander (hamstring) and flying right back Ross Barraclough (holiday romance) were subsided as both made Bailey’s starting XI.
Lining up in a 3-5-2 formation, with positivity at the heart of their plans, Salts burst onto the field, looking to use their attacking pace and defensive guile to overpower a youthful Campion side.
The positivity was short lived. Had this been a boxing context, Salts would have been lucky to make it to the fourth round. Staring into the sun and playing like deer caught in headlights, Salts were unable to get to grips with the Campion midfield affording them too much time and space to dictate the play.
Under the Kosh but not out for the count, striker Brandon Hammond did manage to fashion two chances using his pace to great effect.

Campion continued to play purposefully as Salts continued to play into their hands. Uncharacteristically wasteful in possession, pressure continued to mount on the Salts goal, with errors and uncertainty creeping in. Inevitably the pressure told and Campion took the lead, after their striker’s some-what/not very powerful shot sailed through the hands of the Salts keeper.
Incidentally, for those who wondered what happened to Mexico’s 1990 Goalkeeping sensation Jorge Campos, it turns out either he or his doppleganger now resides between the posts for Salts FC.
At 1-0 down and with backs against the wall, things went from bad to worse as wing-back Ross Barraclough picked up a game ended injury. As Barraclough trudged off to the away end…or to get his end away, Harry Naylor was brought on with Adam Hartley moving to the right.
Salts survived the half, being lucky to only head in 1-0 at the break. The boss had a team-talk on his hands, would he go good-cop, bad-cop, riot act, hairdryer….What-ever was said certainly worked as Salts up the gears in the second half, taking the game to Campion and immediately dominating play.
The introduction of Harry Naylor was paying dividend, with the youngster’s all-action display helping Salts to fashion chances and pen Campion back.
With Salts on top their main outlets started to come into the game. Sam Waterhouse continuing his fine start to the season was pressing forwards, Andy Boote was dominating in the middle and Brandon Hammond was proving to be a nuisance up front, all-be-it already playing the pantomime villain after some first half theatrics.
It was through Hammond that Salts were drew level. As proved to be the case in the first half, the pressure told and Hammond’s calm finish took it to 1-1.
The Salts momentum continued to gather force. Urged forwards by their biggest crowd of the season, including former fans favourite Luke ‘Toadsey’ Rhodes, Salts pressed on for the equaliser. Tom Boldy was brought on to replace Luke Lavery and Salts took the lead soon after. Again it was new striker Brandon Hammond who did the damage, this time smashing a breaking ball into the bottom right hand corner. Hammond has now scored 5 in 3 and has to be a contender for the League’s golden boot.
At 2-1 there were no signs of Salts slowing down. Sensing victory was within their grasp they pressed on. And oh how it was nearly was….With the only the keeper to beat, in-form striker Jamie Birchall slotted the ball under the keeper’s body looking to make it 3-1 and seal the victory, only to see it cruelly bounce back off the post.
As the game came to a climax, Campion found a second wind and again began to push forwards. Salts beginning to tire and dropping deeper replaced Andy Boote due to the possibility of fecal incontinence with Brad Holland moving into centre midfield.
With only a few minutes remaining Salts were unable to hang on. A tiring midfield were unable to close down the campion striker who’s shot nestled into the bottom right hand corner to level the score. It finished 2-2 with a draw probably being a fair reflection of the game, although with better game management both teams could and probably should have taken the three points