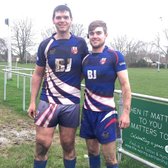 With the world population in shock at the moment, with respect to the Covid-19 pandemic, our two American visitors, James Harris and Kamron Jordan, have decided to make the sensible decision to bring their time in the UK to an end.

The pair managed to make two appearances each in fixtures for the 2nd XV, as they continued their impressive form to claim a promotion place into Hampshire Division 2 next season. The duo also turned out regularly for training and played in the Friday Night Lights initiative, run between Sandown & Shanklin RFC and Hampshire RFU.
While the increased concern brought an end to their journey to Europe, the boys have managed to cram in a lot of touring themselves, having visited Dublin, London, Paris, and Amsterdam, as well as managing to watch Wasp vs London Irish in Reading.

The Club would like to thank the boys for coming over and diving into the team from the off, despite the limited playing time. Equally a huge thank you must go to Chairman, Bill MacPherson, for putting Jimmy and Kamron up for the period, whilst also Geoff Giles made the effort to pick the boys up from the airport!

Best of luck for the future gentlemen, and remember, once a Hurricane, always a Hurricane!