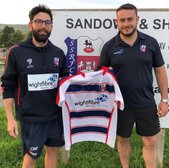 I am very excited to work alongside him, ahead of the 2022/23 season
Damien Marriott

Zak has been a Hurricane since 2013, playing eight seasons for the Club. Starting out a winger and centre, Zak progressed into the forwards and has established himself as one of the best hookers in Hampshire Premier. Having been a Vice Captain to outgoing Captain Sam Flux, for the past three seasons, Zak had this to say about his new role:
"I'm excited to have the opportunity to lead such a strong group of players into what is looking to be a fantastic season coming up!

The character of this Club and all its members is immeasurable and to follow on from such great leaders over the past years, I'm hoping to keep the squad on the same upward trajectory in my time as Captain."

Director of Rugby, Damien Marriott is also looking forward to working alongside his new skipper in the forthcoming season:
"Delighted to announce that Zak has taken up the role of 1st XV Captain, and I am very excited to work alongside him, ahead of the 2022/23 season"