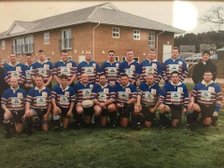 We are sad to report, that former Sandown & Shanklin RFC 1st XV Captain, Keith McLoughlin has passed away.

I am sorry again have to report on the death of a member in such tragic circumstance as you will by now know. Keith was a multi-talented sportsman and a tenacious scrum half who relished the challenges of his position happy to mix it with the biggest of forwards. He became involved in rugby as a youth player from Sandown High School playing through the age groups to colt rugby with the Club and helped out with schools rugby initiatives as a coach. Keith progressed from colt rugby directly to senior rugby before becoming 1st XV captain in the 1999/00 season. He continued to play for the club before moving to the South Midlands with his young family where he played for Bedford RFC and later Old Dunstonians. On returning to the Island Keith again linked up with his old team mates playing for the club before taking up Ice Hockey with the Wightlink Raiders. He also found time to begin coaching youth football for his sons Ben and Ollie and played football himself for Niton for a time. Keith was also an accomplished musician playing drums for a local band and giving free gigs to the club for using the clubhouse to practice in.
Keith’s sons Ben and Ollie remain on the Island and he will be very sadly missed by brother Ian, sister Lisa and dad Mick. All our thoughts are with the family at this very difficult time.

Pictured below photos of Keith involved in teams and events at the Club.