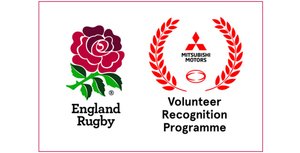 The Volunteer of the Year is a nationwide initiative that gives the opportunity to nominate a volunteer at your club, or wider rugby family.

Nominations for Mitsubishi Motors Volunteer of the Year Awards for 2019 have now closed. But our very own John & Elizabeth Gilfillan, Victoria Winter, and Sam Flux have been nominated for the regional awards ceremony to be held at Winchester RFC on Friday 28th June.

The awards are part of the Mitsubishi Motors volunteer recognition programme that provides grassroots rugby clubs and the rugby community with opportunities to recognise and reward the volunteers who make up such an integral part of the game.

Our fantastic four are part of a select group of rugby volunteers in Hampshire who are invited to attend an awards event held at Winchester Rugby Club on Friday 28th June 2019. At this event, one volunteer will be announced as a volunteer of the year finalist – earning them a place at the Mitsubishi Motors volunteer of the year awards night at Twickenham Stadium on Friday 20th September 2019. Three overall winners will be announced on the evening.

As well as the Mitsubishi Motors Volunteer of the Year Awards, the programme offers a number of opportunities to say thank you to the thousands of volunteers who give back to grassroots rugby, week in, week out. Find out more about how you can show your appreciation for a volunteer in your rugby community by visiting www.englandrugby.com/mitsubishivolunteers