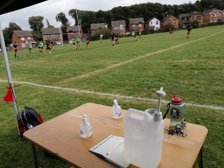 211 days, that was the last time that Sandown & Shanklin RFC had any form of a match played on their grounds. This was a Friday Night Lights fixture in conjunction with Hampshire RFU and one of Ivan Torpey's last outings, before the country and the world were rocked by the Covid-19 pandemic.

Yet, on Saturday 10th October, the club welcomed players, members, and visitors to the Clubhouse, after weeks of planning. A one-way system, table service, masks, and plenty of sanitiser, the Clubhouse was virtually fully booked, as members enjoyed being back in their clubhouse and the live-action from the Gallaher Premiership semi-finals.

Out on the field, the Hurricanes pulled together two sides, and welcome a team from Ryde School with Upper Chine. The three teams played a round-robin tournament, where they played each other twice. The young team from Ryde acquitted themselves very well against their much more experienced foes, and despite not winning any games, they pushed both the of the Hurricanes teams close with some narrow scorelines.

The Hurricanes Yellow team finished second place, as they couldn't manage to defeat the Hurricanes Green team in the two times the two sides faced each other.
This meant in the first 10's tournament held at the Club for years, and the first action saw the Hurricanes green team crowned winners, after managing to win all of their games.

A generally successful weekend all-round, even with a surprise visit from the Isle of Wight Police, who were happy to report that we were Covid-19 compliant and that the guidelines were being adhered to!

Onwards and upwards, as the Clubhouse will be open over the coming weekends for more live rugby on the screens. And fingers crossed a few more rugby tournaments...