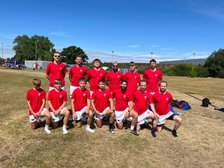 With touch being a massive success over the summer period the Hurricanes travelled over the Solent with enthusiasm. Both teams from the club played fantastic rugby, as both sides made the semi finals, narrowly losing out to both Farnham RFC and Saints Stormers who are a recognised touch rugby teams, who travel up and down the country playing in national tournaments.

The Sandown & Shanklin teams showcased fine skills notching up an incredible 47 tries in total on the day, with big scores against fellow island side Ventnor RFC 12 - 1, Southampton RFC Blues 9 - 1, and another 9 - 1 victory against Stoneham RFC.

2nd XV Captain Michael Cooper captained one of the sides from the Hurricanes, and had this to say:
"I'm so proud of the squad we took over. For both teams reach the semi-finals and narrowly lose was a great achievement. It was also a credit to the players to have the referees comment on our attitude and conduct during the day.
This shows no matter where you are in your rugby journey Sandown & Shanklin RFC is the club to be a part of."