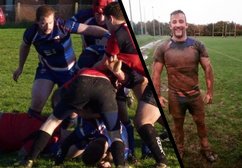 The Hurricanes appoint new 2nd XV Captains and Coaches ahead of the forthcoming season.

At the virtual Annual General Meeting on 28th May 2020, Sandown & Shanklin RFC confirmed their coaching ticket and captains for the 2020/21 season.
Director of Rugby Damien Marriott remains in his role, alongside 1st XV Captain Sam Flux for the third season. The 2nd XV will have new captains, as Michael Cooper and Adam Tyas are appointed as co-captains, alongside Harrison Booth as 2nd XV dedicated coach for the forthcoming season.

Adam Tyas has been a 1st XV regular in the past few seasons at loosehead prop, winning forward of the season in 2017/18. Adam is also a coach in his spare time and having coached Vectis U14 through to Colts age groups and will most likely play with players he has coached in the both the 1st and 2nd XV’s.

“I'm proud to be selected as co-captain of the 2nd XV with Coops for the 2020/21 season. We have a challenging season ahead of as the league restructure means every Saturday will be a competitive game. We have a young squad, full of talent and potential, that I know can push to compete for the top spots in Hampshire 3. I also want to say thank you to the work of Damien Marriott, Sam Flux and Liam Little over the last couple of years, the entire squad is in a much stronger position and I know there is a lot more to come.”

Adam’s Co-Captain, Michael Cooper has also been a Sandown & Shanklin regular for the past decade. Michael, starting out as a flanker in his youth days, evolved to playing scrum half and then centre, for both the 1st and 2nd XV’s.

“This season we are looking to build on the great work previously done by Liam and push the team to new heights. Adam and I have some targets set for the season ahead, and personally, I cannot wait to get started. There is some serious talent in the squad and players with real potential that have every chance of making the 1st team. There is a great atmosphere at the Club, and in our 60th anniversary year, i can see us challenging for honours at the top of Hampshire 3”

Harrison Booth has been added as Damien’s assistant on the coaching ticket, with a focus on forwards and developing players, especially managing the transition of players from youth rugby into senior rugby.

“Although a reoccurrence of a severe injury has forced a stop to my playing days, I am excited about giving something back to a club that has given me so much. My main goal will be the development of younger players coming through the club system, helping with the transition from junior to senior rugby. I am looking forward to taking on the responsibilities with the aiding the development of the 2nd XV, and it is a great honour and something I want to focus on. I am very happy to be developing my coaching credentials under our Damien’s guidance, and being a part of the great history of SSRFC.”

Sandown & Shanklin RFC have begun pre-season training on Thursday evening, with England RFU stating that the rugby season could start, at the earliest, in Mid-November. The one session a week is closely monitored with RFU and government advised guidelines, to ensure that everyone is safe.