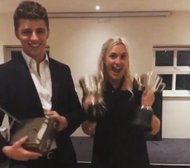 A fantastic night was had by all who attended the End of Season Dinner & Dance.

Over 70 players, supporters and better halves made it to the annual End of Season Dinner & Dance. A massive thank you to Charlotte Lock-Dean for organising the evening, which was very well attended and capped off an excellent season for the Hurricanes. After an excellent three course meal, Volunteer awards were handed out for their efforts throughout the season: Bill Macpherson, Damien Marriott, Victoria Winter, John Gilfillan, John Buckingham, Colin Bond, Hugh Griffiths Charlotte Lock-Dean, Emma Kulik and Theadora.
Also a thank you to those volunteers that weren't present on the evening: Simon & Lorraine Swallow, Tommy & Kim Booth and Elizabeth Gilfillan