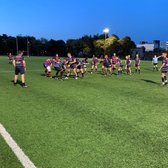 Hurricanes Victory in Pre-season Hit Out

Sandown & Shanklin defeat US Portsmouth under Friday night lights to kick off the new season.

The Hurricanes kicked off the 2019/20 season with an away friendly against US Portsmouth on Friday 23rd underneath the lights on their astro pitch. The hosts preparing for the season in London South West 3, and the Hurricanes making preparations for the Hampshire Premier season.

The visitors didn't get off to the best of starts, conceding a soft try to the hosts. However, after building themselves into the game, the confidence grew for the Hurricanes, and after a few attacks which were held our by US defences, eventually, Harry Miselbach dotted down for the first try for Sandown & Shanklin.

Both sides rotated for the second quarter, and the Hurricanes built upon their momentum, with an opportunistic intercept try from man of the match, Owen Williams, who showed great poise and pace to score. Although Captain Flux didn't from the tee, missing an easy conversion in front of the posts. Big impacts from newbies Sam Dawson and James Pemberton were making it hard for the hosts to breakdown the Hurricanes defence.

The third quarter saw again more rotation from the sides, but this didn't detract from the quality of rugby being played between the two teams. Impact coming from the young trio of Rob Newton, Jack Stay-Sothcott and man of the match Connor King, with all three impressing late into the fixture. US Portsmouth scored their second try, to nudge themselves ahead into the lead, but Flux redeemed his earlier misdemeanours with some quick thinking, taking a quick penalty and burrowing over for the away sides third try.

The fourth quarter saw both teams starting flag, but not letting the quality of the rugby drop. The Hurricanes maintained momentum and scored the fourth try, with a neat line out move at the front, which allowed Darren Carew an easy walk in. The hosts attacked hard in the last ten minutes, but a resolute defence from the Hurricanes held the hosts at bay, for a decent first run out, 12 - 22.

Sandown & Shanklin turn their attention to Saturday 31st August, when they welcome Gosport & Fareham RFC to the Fairway for the first round of the Hampshire Bowl. The fixture will also mark the return of former Hurricane, Aidan Price, and now 1st XV captain of Gosport & Fareham.

Kick off on Saturday is at 3.00pm, with the bar open from 2.00pm. All are welcome to come and support the Hurricanes.