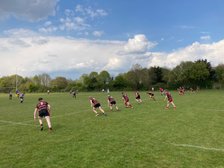 Rugby Action Returns, with a Hurricanes Victory in 2021

The Hurricanes returned to the field in 2021, as they made the short trip across the Solent to their hosts Southampton Medics RFC, who kindly put on the game for the visitors.
A mixed side between the SSRFC 1st and 2nd XV's took on a promising and talented Medics team, playing under the adapted laws of the game, due to Covid-19 restrictions.

The hosts started brightest and took an early two-try lead, as they exploited the inexperience and rustiness of the Hurricanes in the opening exchanges. Nevertheless, it didn't take long before the away side settled back into some sort of normal rhythm, and scored their opening try. A penalty tap, and some sharp passing found space for Michael Barret to power over out wide. The try converted, cutting the deficit to 12 - 7.
The hosts didn't take this lying down, and scored another try before the halftime break, leaving the scoreline 19 - 14 to the Medics.

Following the halftime break, the Hurricanes were the first to get scoring back underway, when Ollie Scovell scored from short-range, to again, pin back the home side. Again converted, leaving it 19 - 14. The next Sandown score was flanked by a further two tries from the Medics, but quick feet and the eye for the gap, saw fly-half Jevon Dry dart home, leaving the scores at 29 - 21, to the hosts with just under a quarter of the game remaining. Sandown & Shanklin's fourth try came from the quick thinking of Liam Little, although unconverted, it left the game teetering at 29 - 26 with ten or so minutes left to play. Superb defensive efforts from Captain Zak Chiverton, second row Jack Winter, and Martin Richomme, frustrated the Medics all day. And then with minutes remaining, quick turnover possession was spread wide and kicked through. Speedster Max Henley put pressure on the Medics full back, who fumbled the bouncing ball, and allowed Henley to kick through and collect the ball to score under the sticks. With the score converted, the Hurricanes snatched victory away from a very handy Medics side, 29 - 33.

Again, a big thank you to Southampton Medics for hosting and providing support on the day, and also the Hampshire Refs for providing a referee. It was great to have rugby back on the field, and some more fixtures forthcoming!

The Hurricanes have now lined up an away fixture against Fareham Heathens on Saturday 8th May. This will be followed by a Club game under lights on Friday 14th May, and the fingers crossed at least two further fixture on Saturday 22nd and Saturday 29th May.