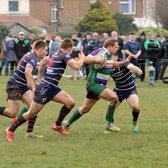 Sandown & Shanklin made the trip down to Bognor Regis, to play Bognor in top of the table clash between the 2nd and 3rd placed teams in Hampshire Premier. Those that made the trip to support the Hurricanes, and home supporters, were not disappointed with a fine afternoon of quality rugby.

The hosts started the tie the brighter, getting into the patterns of play with their big forwards coming around the corner. The Sandown & Shanklin defence held firm, and some sterling tackling from Harry Hopper and Ben Shannon was keeping the hosts at bay, as the home side pressured the defence outside the 22. The set piece battle was keenly contested, but neither side could really get an upper hand over the other in the opening exchanges, as the bigger Bognor pack attempted to impose themselves on the visitors. More resilient defensive work by the Hurricanes back line, helped earn the away side valuable penalties and clear their lines.
The forwards worked hard to provide possession for the backs, yet they could not generate the quick ball they desired, and the Bognor defensive line were making big tackles to stop Sandown & Shanklin making headway. As a result from another big hit in the midfield, Bognor recaptured possession and with a smart grubber through by the opposition fly-half, he gather his own kick to dot down for the opening score. The conversion successful, the hosts were 7 - 0 up after the opening quarter.
With the home side in the ascendancy they looked to extend their winning margin, looking to their big forwards again to get them on the front foot. Working their way up to the Sandown & Shanklin 22, the hosts 10-12 partnership came up with a clever one-two in rugby terms, with a final offload which the Bognor stand off managed to score under the posts, and convert for a 14 - 0 lead, ten minutes before the break.

The once the second half resumed, the Hurricanes started the much brighter, and desperate to get themselves back into the tie. Working their way into the Bognor 22, following a trademark line-out maul, this provided the Sandown & Shanklin back line some much needed possession. Man of the Match Sam Tyson made a smart break which ended up accruing a penalty for the visitors, and after play was brought back to the original mark, Flux converted the penalty to get the Hurricanes off the mark, 14 - 3. This period of play sparked life into the away side, and they began stretching the pitch and using their handling ability to test the Bognor defence. This change in tact reaped higher rewards with the boys in blue making better in roads into the staunch Bognor defensive line.
An attack down the blindside saw Number 8, Harrison Booth evade one tackle, and then make a mazy run from inside his own half deep into the Bognor half. With the hosts fullback just about tackling Booth, the number 8 then managed to offload to winger Owen Williams, who then dashed in under the posts to score. Flux converted, 14 - 10 and the Hurricanes were all of a sudden back in the game.
With the momentum swinging again, the hosts were under increased pressure to withhold the Sandown & Shanklin attacks, and also keep their discipline under wraps. Some more attacking play from fly-half Cameron Mitchell opened up holes in the home sides defence. Prop Martin Richomme made a break and dashed into the Bognor 22, and with another penalty coming the way of the Hurricanes, by time the referee brought play back, Flux converted to cut the score to a one point game, 14 - 13.
The final ten minutes of the game were a whirlwind of action, with the home side desperate to hold on, and the visitors equally determined to find the score to turn the game in their favour. With the Hurricanes looking to move the ball as much as possible, some last ditch tackling from the home side held the away side back. And with time dwindling, Bognor held on for the victory, and for the mean time puts their noses ahead in the race for 2nd place in Hampshire Premier.

Director of Rugby, Damien Marriott shared his thoughts after the game:
"Tough lesson but fair play to Bognor today – in a lot of ways, it was a very good game of rugby. It was end-to-end. There were some good tries and some mistakes, and with us not playing for two weeks they got off to a great start.
I said to the boys, that it’s a losing point away from home, and it is the next best thing we could hope for. We came very close to getting the win at the end, however, it’s still in our hands (to secure 2nd place) and that’s the way we want it.
We look at ourselves as a team who wants to play above par most of the time, so we are a little frustrated not to get a little bit more out of the game. But sometimes, you have got to take a few things on the chin.
Off the field we had a excellent day out, and that is one of the more important things. With great support from the spectators and a packed coach, the journey home was at least one we won’t forget!”

The Hurricanes now turn their attention to the 23rd February, with a re-arranged fixture against Tottonians RFC 2nd XV away from home. They will make their trip with the 2nd XV who will also play Tottonians 3rd XV.