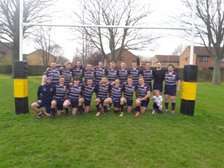 Sandown & Shanklin made the trip across the Solent, for the final league game of the season, against Portsmouth RFC 2nd XV. Following two weeks of called off fixtures, Portsmouth gallantly raised a team, despite being shorn of numbers.

The opening ten minutes the hosts had the upper-hand, maintaining possession within the Sandown 22, as penalties were counting against the visitors. Yet when possession finally came the way of the Hurricanes, they showed that they were dangerous ball in hand, and eventually Jack Wedderkop scored his first try of the game after swift handling in the build-up helped him into space to sprint away.
This was then followed by tries for Sam Tyson, Ben Sanderson and then Jack Wedderkop got his second before the first quarter of the game was up. Two conversions by Tyson and one from Flux, had the away side up 0 - 26.

In the second quarter of the first half the Hurricanes went through the gears and scored a further five tries before the half time break. Ben Sanderson scoring his second following a superb break by flanker Hopper. The returning Michael Barrett scored his first try back in a Sandown shirt, scorching his way past opposition defenders to then dot down.
Sanderson then completed his hat-trick following an excellent break, instigated by winger Josh Wetherick, who started inside the Hurricanes 22, and was eventually tackled in the Portsmouth 22. When the ball was spun wide, Sanderson was on the receiving end to score.

Sandown's eighth-try came around following excellent work at the breakdown by the returning Ryan Carey. Carey got in low and stole possession at the breakdown. The ball was then moved away quickly, first by flux who dummied and fed his second-row partner Seder. Seder then found Hopper, who sprinted away from the scramble defence. He then drew the final defender and found Damian Seder again, who then went in under the posts to score.
The first half was drawn to a close, when Barrett managed his second try of the game. A period of strong carrying from the Sandown forwards, with Sam Branston and Zak Chiverton creating momentum for the away side. With the defence being sucked in to stop the Sandown momentum, there was space down the blindside, and Tyson fed Barrett, who did well to dot down under pressure. Hurricanes were up 0 - 55 at the half time whistle.

With the result more or less settled, the Hurricanes main aim was to maintain momentum and also avoid any serious injuries ahead of the big game next weekend.
Sandown came out of the blocks quickly, with Jack Wedderkop completing his hat-trick of tries, following some quick offloads in the midfield to set the centre free. Jack's centre partner Tyson was also back on the score sheet, getting his second of the game.
After helping assist and create several tries himself, winger Wetherick eventually was rewarded with a try of his own. Off the restart, the ball was recycled in the midfield, and fly-half Cameron Mitchell took play down the blindside. Mitchell fed Skelley, who did well to offload in the tackle to Flux, who then drew the defenders to free up Wetherick. Josh then broke out from just inside the Sandown half to score.

It wasn't all Sandown's way. The increasing penalty count against the Hurricanes allowed the hosts back into the game, and deep into Sandown's 22. Off the top of a lineout, a strong carry from the replacement back-rower broke the line and found the opposition centre, who barged his way over the try line.
The Hurricanes rounded up the scoring with two more tries, the first to complete Michael Barrett's hat-trick, after a good line out and then a maul by the forwards gaining yards up the field. Finally, Man of the Match, Ben Sanderson scored his fourth try of the game, when he chased down Sam Tyson's kick through. After collecting the ball, Sanderson did well to then evade the oncoming defenders to score in the corner and bring the game to a close.

In the end the result was never really in doubt, and the runout was much needed, following two successive weeks of walkovers. Nevertheless, a nod to the hosts who coped well despite being depleted in numbers, who put up a good fight.
So it all comes down to next Saturday (13th April), when the Hurricanes host Weybridge Vandals at the Fairway, to fight for their place in London South West 3 next season. 3.00pm kick-off hope to see you all there to support the boys!