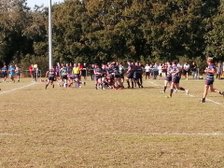 A ten try haul from Sandown & Shanklin, as they impress against a strong Bognor team.

After a week off due to a bye in the fixtures, Sandown & Shanklin welcomed Bognor to the Fairway for their second league fixture of the 2019/20 Hampshire Premier campaign. Last seasons second and third-placed teams have had hard-fought and tight affairs over the years, and the expectation was that the visitors would provide a tough opponent, and want to bounce back after a narrow loss the previous weekend.

The home side got the game underway, kicking to the visitors down the pitch. The opening exchanges were physical, as both sides probed each other to find a way into the game. The Hurricanes wrestled possession from the away side at one point and strong carrying from Shannon, Flux and Chiverton took them up to the Bognor 22. Then a short line from Wayne Williams saw him puncture the Bognor defensive line and sprint away to score in the corner. Flux lined up the conversion, yet it slid wide, 5 - 0. The away side restarted the game, and despite possession being handed back to Bognor, the Hurricanes were able to clear their lines.
The hosts were fortunate to secure possession from the restart and struggled to clear their lines at the first time of asking. However, after a strong scrum, the home side cleared the lines. Excellent pressure from the young duo of Hopper and Seder at the lineout, continuously put pressure on the Bognor set piece. The visitor's attack was not making the momentum it desired with strong tackling from Ben Shannon, and Matt Miselbach to the fore. Sandown & Shanklin turned possession over at the breakdown and Flux kicked the penalty deep into Bognor's 22. The strong maul was stopped short of the try line and the backline looked to play. Back-row come centre Harrison Booth, being stopped with a strong carry. Yet as the Bognor defensive line splintered, flanker Harry Hopper evaded numerous tackles before being bundled over the try line for the host's second try of the game. This time Flux converted, to increase Sandown's advantage, 12 - 0.

Unfortunately young prop Ben Shannon had to be carried from the field with an injury and looks to be out for a couple of weeks with an ankle injury. Nevertheless, this didn't slow the Hurricanes momentum, and Ben's uncle Darren Carew was introduced in is place and scored the home sides third try of the game. The forwards working play into the Bognor half and the backline outmanoeuvring the defence to create the space for Carew to charge in 15 metres out. The advantage increased to 17 - 0.

Bognor fired back, and it wasn't all Sandown's way, with the opposition centres causing the hosts defence some issues, and managing to pierce the defensive line at one moment to score and give themselves a foothold into the game, 17 - 7.
From the restart, the Hurricanes pressured the receiver and the Bognor forward looked get momentum back in their favour. Winger Michael Barrett did exceptionally well to read the Bognor attacking play to then intercept the pass and sprint in to score for the Hurricanes fourth try of the game, and secure the bonus point. Flux converted the try, 24 - 7, with ten minutes remaining in the first half.
Flanker Wayne Williams grabbed his second try of the game, following some excellent play in the midfield, which provided Williams with the space to dot down. Flux missed the conversion, but the Hurricanes went into the half time break with a commanding 29 - 7 lead.

Following the half time interval, the visitors ramped up their intensity, attempting to find a way back into the game and through the impressive home side defence. Impressive defensive work from the Hurricanes prevented the visitors from breaking into the home sides 22 and threatening their try line. Excellent work again from flanker Harry Hopper created the turnover at the breakdown and allowed the Hurricanes to gain territory in the Bognor half. Another strong catch and drive and the line out saw the home side take play up to the visitors 22. A number of strong carries from the forwards took play closer to the try line, and eventually, when space opened up, some quick handling allowed Matt Miselbach to score for the Hurricanes. Flux converted, 36 - 7.
With Sandown & Shanklin playing up the hill now, the challenging restarts from Bognor were being claimed a little more convincingly and allowing the hosts to get into their patterns of play. With the forwards running their phases, this created the space for the Hurricanes back line, and allowing them to outflank the Bognor defence. As centres Sam Tyson and Harrison Booth making the most of space available, took the play into the Bognor 22. The visitor's defence again attempting to halt the Sandown momentum, but could not hold back the dynamic drives from the forwards. A phase later, flanker Wayne Williams thought he had his hattrick, but lost the ball in contact, as he hit the rugby posts and bundled over the line. However, minutes later, Williams was able to make amends, when the Hurricanes attack again outflanked the Bognor defence and gave the flanker now winger the opportunity to sprint in for his hat-trick. The conversion missed, 41 - 7.

With twenty minutes remaining the Hurricanes introduced prop Sam Dawson and flanker James Pemberton into the fray and to maintain the host's intensity. From the restart smart play from the Hurricanes took them into the Bognor half and looking to get another score. Moments later quick handling from fly-half Owen Williams created space for centre Tyson to step his way through the defence and to sprint to the try line to score. Flux converted, 48 - 7.

As the clock wore on the visitors still looked to play and get something from the game, yet when their forwards looked to play just outside their 22, a missed pass was collected up by the impressive Frenchman, Richomme, who then sprinted in and evaded two defenders to score a very opportunistic try. The try converted, and the Hurricanes broke the 50 point barrier, 55 - 7.

From a Bognor line out, possession was stolen by Captain Flux, who then charged upfield. Some strong carrying from Hooker, Chiverton and Dawson took play into the Bognor half. A phase later, fly-half Owen Williams, used his impressive pace to weave past defenders and accelerate away from would-be tackles to go in under the posts to secure the Hurricanes tenth try. Flux converted to push the score past the 60 point barrier, 62 - 7.

The game didn't quite reach 80 minutes, with an injured Bognor player down, the referee called the end of the game, a few minutes short.

Director of Rugby, Damien Marriott reflected post-game on his side's victory:
"An excellent performance from the boys today. I was absolutely delighted for them to score ten tries, especially against a team of the quality of Bognor, who never are an easy prospect. We had worked on a plan and put it into place for this game, and the lads worked hard and executed the plan perfectly. Now we need to remain grounded and prepare for another big test next Saturday, away to New Milton. We go again."

Sandown & Shanklin travel for their first away league fixture this season, making the short trip to New Milton & District RFC. The 2nd XV are at home and look to welcome Kingsclere RFC at the Fairway, in hopefully their second league fixture of the season. Kick-off is set to be 3.00pm.