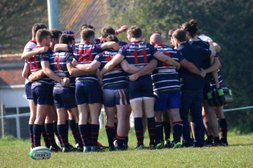 Sandown travelled to the New Forest for Round 14 of the Hampshire Premier season. The hosts started brightly and scored a try in the first five minutes after outmaneuvering the Hurricanes defence. The start from the visitors was so slow that they were fortunate to only be 10 - 0 down after half an hour of play. Nevertheless, the Hurricanes eventually fired into life after a string of penalties allowed them to gain valuable territory in the hosts 22. The lineout catch wasn’t clean, but Sandown managed to get a maul formed and moving forward to the try line. As the maul progressed to the try line, possession was transferred to Darren Carew he barrelled his way over the try line to get the Hurricanes back into the game, 10 - 5.

From the restart Flux bravely secured possession, and with the visitors beginning to hit their stride, Jack Winter continued momentum with an impressive carry in midfield. The ball was spun wide to Michael Barrett who broke the defensive line, and evaded the Ellingham full back to dot down. The conversion fell short but mean that the sides went in tied at half time.

The Hurricanes began the second half more brightly than the first, and were pressuring the hosts defence. A string of strong carries from Sam Rees and Matt Miselbach caused the Ellingham defence to splinter and infringe. The resulting penalty saw the hosts flanker sent to the sin bin, and Flux converted the penalty for the visitors to lead for the first time, 10 - 13.

With the man advantage, the Hurricanes edged their way back up the field. The visitors attacked the blindside and found an overlap, as Jacob Jordan fed Flux he in turn offloaded for Nathan Proud to score in the corner. A contentious decision as a high tackle in the process of Proud scoring could have seen the try become a penalty try. The conversion again sliding agonisingly wide, but increasing Sandown’s margin, 10 - 18.

As the game entered the final quarter injuries and fatigue started to tell. Man of the Match Harry Miselbach was tackling anything that moved and tirelessly covering the ground to maintain the Sandown defensive line. As the pressure mounted on the Hurricanes defence, the hosts again managed to work their way around the Sandown defence and score their third try of the game, 15 - 18.
This presented a very tense final ten minutes of the game, as Ellingham pressed to find a breakthrough. Young Max Henley and prop Dan Noyes came off the bench to make their 1st XV debuts for Sandown and help their side to a victory.
Ellingham were presented two opportunities, two penalties around 35 metres out. The first attempt fell short and allowed the visitors to clear the lines. However the second attempt moments later was converted and tied the scores at 18 apiece.
The final few minutes of the game, both sides pushed to find a final coup de grâce. Ellingham came closed, when their fly half attempted to cross field kick, however, he didn’t realise it was Matt Miselbach in the wide channel and not his winger he kicked the ball to. The ball was eventually knocked on, and the game brought to a close.

Director of Rugby, Damien Marriott shared his post-game thoughts:
"The boys didn't start well at all, and they will agree with that statement. They dug deep and showed some great character to fight back into the game. Credit to Ellingham, they played well at moments, but in the end, a draw was a fair reflection of the fixture"

Next weekend the Hurricanes are back at home and welcome Alresford RFC to the Fairway Ground.