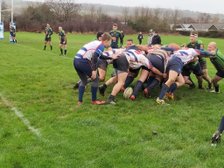 The Hurricanes score six tries in the 2022 opener!

The Hurricanes hosted old rivals, New Milton, at the Fairway in extremely difficult conditions. As expected, it was a tough battle to start the New Year, as the visitors started the brightest in the early exchanges. Displaying their class with quick interplay and smart offload. Had it not been for a fantastic defensive effort from Liam Little and Michael Cooper, New Milton would have taken the lead.
Having dug deep it was time for hosts to unleash their attacking prowess. With a penalty inside the oppositions 22, Skipper Flux opted for a scrum and the pack delivered, with props and Wightfibre Man of the Match Darren Carew, and Adam Tyes driving the New Milton backward over the try line. With the opposing back row offside stopping a certain try for Matt Miselbach, the referee had no option but to award the Hurricanes a penalty try, 7 - 0. This was the start of a very dominant first half; as wave after wave of attacks, led by halfbacks Jacob Jordan and Nathan Proud steering the team around the field. They then found Harry Mislebach who scored with a fine finish, 12 - 0. With their tails up Sandown did not look like stopping, and strong carries from both Luke Hunter and Sam Rees got front foot ball. As the New Milton defenders narrowed this allowed Matt Miselbach to power through the defensive line to dot down. Flux adding the extras 19 - 0. The try-scoring bonus point came shortly after as Harvey Kirby, taking an inside line off Proud, and Michael Barrett sucking in the full-back, creating a simple two on one for Zak Chiverton to find himself on the wing and finish. Completing a well-worked training ground move 24 - 0.

The second half started similarly to the first half, but now with New Milton having the advantage of having the wind behind them, they were determined not to give in. They started brightly, gaining an advantage in the set-piece battle and gaining valuable territory with smart kicks pinning the Hurricanes deep into their 22, against the slope. However, a huge desire to battle hard brought frustration to the visitors as the New Milton prop was sin-binned for telling the referee how to do his job. This provided the home side the opportunity to clear their lines and build back into the game with the extra man advantage. This was used to great effect when Barrett elected to go down the blindside and picked out Damian Seder, who sprinted in to score in the corner, 29 - 0.
The Hurricanes sixth and final try of the afternoon, was perhaps the pick of the bunch and maybe a contender for the try of the season. Starting from inside their own 22, Sandown's quick thinking resulted in them taking a quick tap penalty, this caught New Milton on their heels as the ball worked its way up field with Henry Bagnall clearing rucks and Hugo Jolliffe punching holes in the defence. This presented the opportunity for second row, Flux to show off his skills, and akin to a Charlie Hodgson, measured a fine cross field kick for Charles Little to display his footballing skills with a great first touch that Patrick Bamford would be proud of, nudged the ball forward. Little's pace then chased the ball through to dot down a perfectly positioned kick into the goal line area. A sublime conversion for Flux left the score at 36 - 0.
New Milton finished the game with a fully deserved try, with the clock in the red, the Hurricanes were denied a clean sheet. With the game finishing, 36 - 5, and capped off an incredible performance from the home side.

Director of Rugby, Damien Marriott, shared his post match comments:
“A great way to start 2022, putting a performance in like this against a very capable New Milton side was very pleasing. With the games coming thick and fast, this gives us the opportunity to kick on and finish the season in a strong position”

Next weekend the Hurricanes are back on the road, as they travel to Ellingham & Ringwood RFC. The 2nd XV are also in action, at home, welcoming Southampton RFC to the Fairway.