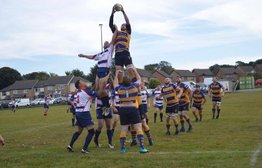 Sandown & Shanklin welcome rugby back to the Fairway, but are defeated in an engrossing battle.

574 days since the last fixture in Hampshire Premier, Sandown & Shanklin welcomed competitive rugby back to the Fairway, this time around welcoming league contenders Gosport & Fareham RFC. The visitors having been relegated following the premature conclusion of the 2019/20, looking to bounce back into London South West 3 with a promotion at the first attempt.

The visitors kicked off, playing down the hill in the first half, with the Hurricanes receiving possession and setting about imposing themselves on the game from the outset. The early exchanges were physical and tense as both sides looked to test and probe one another, like two heavyweight boxers attempting to find a big punch early on. The over-eager Hurricanes infringed at the breakdown and allowed the visitors an early shot at the posts from the penalty. The attempt drifted wide, which would turn out to be quite a theme throughout the afternoon. Despite the early pressure from Gosport & Fareham, the hosts looked the more enterprising ball in hand. Debutant and Wightfibre Man of the Match Anthony Burr at fly-half was getting his backline moving and into play nicely. This allowed the Hurricanes to get on the front foot.
Despite the positive play, it was the visitors who got off the mark first. With a dominant drive in the scrum the penalty was awarded to the Hurricanes, however, the resulting lineout was lost and with possession back in G&F's hands they looked to score. It took several attempts to break down the resilient defence, but a charging run from a Gosport prop broke the line and some quick hands afterward saw the visitors in for the first score. The conversion going awry, a narrow 0 - 5 lead for Gosport & Fareham.

The hosts rallied and soon recovered possession from a line out, following a G&F clearance off the restart. The quick ball off the top of the set-piece allowed the centres Wedderkop and Barrett to get on the front foot and the Hurricanes quick ball. This presented the opportunity down the blindside and some swift handling saw hooker Zak Chiverton score. The conversion attempt slid wide from Burr, but the game was all tied up at 5 -5.
With both sides level again, it almost seemed fitting that the see-saw nature of the game would see Sandown & Shanklin attempting to get in front for the first time in the game. The tireless effort from the Hurricanes Man of the Matches, the Miselbach brothers, meant that the home side had secure possession at the breakdown. With Darren Carew and Flux making yards with hard carries towards the visitors try line, a second score looked on the cards. Another move down the blindside, with O Williams feeding Chiverton to break through again. This put the Hurricanes up, 10 - 5, but another conversion attempt going wide.

With the hosts in the lead Gosport searched to find a route back into the game. With a penalty in the Hurricanes half, G&F kicked the penalty into the Hurricanes 22. Off the back of lineout, a quick maul surged toward the try line, and as the defence attempted to prevent the drive, a break away from the maul saw the flanker drive over and score in the gaps around the maul. G&F leveled the scores into the halftime break, with another conversion attempt sliding wide, 10 - 10.

In the second half, the Hurricanes were playing down the Fairway hill, and looked to find a way to regain the lead. Through the competitive restart, Chiverton was able to leap the highest and be able to regain possession and look to find a way ahead. Carrying from Flux again and Rees put the Hurricanes in a handy spot before a turnover penalty allowed Gosport to relieve the pressure. An initial yellow card to the G&F flanker saw the numbers in the host's favour, however, a penalty allowed the away side to kick possession into the Hurricanes 22, and a smart five-man lineout, followed by a quick maul again, saw the visitors surge once again to the try line. With the try line beckoning and over-eager defence saw Carew yellow carded and the Gosport drive scoring, putting them ahead again, 10 - 15.

This swing in momentum saw Gosport & Fareham take control of the game, and despite Chiverton once again getting up and securing the ball from the restart, possession was coughed up a few phases later. The game began to open up even more, with both sides looking to move the ball wider into space. A successful 50/22 from the G&F winger accrued possession in the Hurricanes 22. The home side was able to withhold the maul drive and managed to secure a scrum due to a knock-on. A number reset scrums as personnel changes adjusted to the pace of the game, but the latest saw the ball rush out of the back of the scrum, and allowed the quick-thinking Gosport winger to collect the ball and run in unopposed for the away sides fourth try of the game, 10 - 20.

With Sandown trying to find a foothold in the game and momentum swinging their way once again, a penalty opportunity arose in front of the G&F posts, and Flux elected for Burr to convert the penalty. This cut the deficit to 13 - 20 with fifteen minutes remaining on the clock to play.
Despite the desperate efforts from the Hurricanes, the final score ended up going to the away side, as they put the cherry on the top with a fifth unconverted tries, leaving the final score 13 - 25 to Gosport & Fareham.

The Hurricanes look to bounce back next week, when they travel away to New Milton & District RFC on Saturday 2nd October. New Milton having picked up two victories from two games will surely look to extend their winning streak, whilst the Hurricanes will be aiming for their first victory this season.