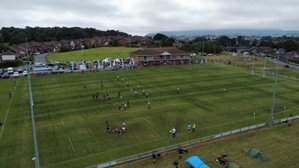 A veterans team made up of select players from all three island clubs took to the park at the Fairway to take on a Veterans Royal Marine side made up of a number of former professionals and serving military personnel.

The home side started the brightest with a quick score from skipper Greg Dean crashing through the defence after some great forward play.
Relentless defensive hits from Danny Thomas and Mark Tindall kept the RMA out but finally, they found an opportunity through their rapid winger to score in the corner.

A swift response from the Islanders spearheaded by Damian Marriott who offloaded to Sam Rees who broke a number of tackles to set up Dean Magnusson who crashed under the posts. Another try followed with again Marriott the instigator with a clever grubber kick through for Ross Edmunds to chase and touch down. The RMA then found their way with two converted tries just before half time going into the break with a slight lead.
The Islanders again rallied through some swift running by Josh Weatherick and some fierce charges by Todd Riches and Bill Bus who continually made yards. With Garry Warvills bossing the backs from fly-half the home side found themselves with a good batch of possession and with the visitors infringing again Dean took the quick penalty himself, sidestepped a couple of backs, and scored again.

Although the final quarter RMA failed to give up and pulled back another try through their big forward pack. Before long after some great work at the ruck by Darren Gough and the uncompromising Jon Muscles and some strong running from Pete Swallow Dean found the ball again to complete his hattrick.
From the kick-off, the relentless effort of Paul Laidler won the ball for Marriott to kick possession to the corner, and with the pace of Warvills getting there first managed to hack on round the defence to score in the corner.
This then gave the home side an opportunity to strengthen by introducing the finishers of Ricky Harris, Bob Simpson, and Simon Swallow all contributing for the last quarter. A final opportunity allowed the Island side to take a further three points to cement the very well deserved victory 43-34.
The WightFibre man of the match went to Dean Magnusson for his relentless carrying all game.