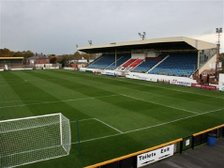 Southport FC's Haig Avenue will be a washed with Claret & Blue this Tuesday evening as Scarisbrick Hall FC face local rivals Clarence FC in the Final of the Billy Little Cup.

Scarisbrick Hall are looking to claim their first silverware since being founded just 2 years ago, 2013. The side have endured an impressive rise through the divisions, gaining promotion from the 3rd Division in their first season, and continue to impress during this campaign as they looks so secure promotion to the 1st Division in the coming days.

However, the side have struggled in cup competitions, having never progressed past the quarter-final stages of any cup competition previously. Facing local rivals Clarence FC in the final they will have every confidence in going all the way given the rerecord against their opponents.

Scarisbrick Hall have had the upper hand over the 4 past meetings between the two sides, the sides sides have shared the spoils so far this season both claiming away wins (Clarence won 5-2 at Altcar Road, Scarisbrick won 2-1 at Portland Street). However in the 2013/14 season Scarisbrick dominated their opponents with a 3-2 and a 5-0 victory on the last day of the season (Martyn Walsh missed a penalty for Clarence FC and defected to Scarisbrick Hall FC shortly after).

Clarence FC's route to the final: