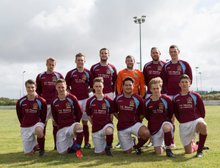 Previous meetings between the two teams suggested a game of fiery passion, and the sides didn't disappoint. Tackles all over the pitch, every player prepared to put a shift in, none more so that Jay Jones on his debut, scything down the visiting striker in the opening minutes of the game.

It was difficult to split the sides in the first period, Scarisbrick Hall looked to squander the better of the first half chances. But managed the keep the visitors at arms length, the best of there efforts from outside the box, pushed away from danger by Soffe.

Scabby Hall looked sharp going forward, the abundance of skill and pace from Ben Grogan, Joe ??? and John O'Leary tested the back line of the visitor and proved to eventually wear them down.

Within minutes of the restart, Scarisbrick Hall broke the deadlock. A moment of magic from John O'Leary, collecting the ball on the left, with little options in the box produce a delightful curling effort into the top corner, leaving behind the keeper with no chance. 1-0

The home side couldn't keep the lead for long, Sacred Heart firing back within 5 minutes. A breakaway attack held up on the edge of the box, but the Laurel & Hardy defending from Dave Jones and Phil Roberts provided a yard of space for a visitors commanding midfielder to fire off a purler into the top corner drawing them level. 1-1.

Scared Heart catching a second wind, reversed the scores in controversial fashion, with the referee misinterpreting the offside run with the on rushing Tom Soffe closing down a strike from a high ball. With Soffe out of the picture the ball was played forward with just one defender covering, a certain offside, but the referee playing on to allow the inevitable goal to stand, to the rousing protests of the Scabby Hall players. 1-2.

Chasing the game, Scarisbrick Hall looked to press for an equaliser and force extra time, in there quest for progression into the 2nd round of the competition.

The endeavours of the home side reaped their reward, Lee ??? notching his first goal for the club, forcing the ball home from close range. 2-2.

Full Time - with the scores tied and Scared Heart looking weary, the visitors looked to skip the extra 30 minutes going straight to penalties. But denying the request Scarisbrick Hall sensed they had the upper hand.

Another dubious decision saw Scarisbrick Hall with a goal chalked off, a good through ball released Ben Grogan, just the keeper to beat, he squared the ball to Joe who cooly finished from 6 yards. The play deemed offside, the referee looking to make a game of it.

After holding off the second wind of the visitors in the opening minutes of extra time, Scarisbrick Hall hit the front once again, Lee ??? doubling this Scabby Hall goal tally. Ben Gorgan saw his initial shot saved following up Lee slotted from edge of the box past the already down keeper and round the defenders hapless sliding efforts. 3-2.

After a flurry of missed chances, the game was put beyond the visitors. Ben Grogan getting his first of a brace, Joe feeding the ball through, Grogan shrugging of a challenge to keep his feet, to stroke the ball home. 4-2

Scarisbrick Hall dominating the game now as Sacred Heart wilted. Joe ??? felled after driving run across the box, saw the home side awarded a penalty. Paul Gavan given charge of penalty duties before the game looked to step up, Frankie Medlicott wielding the axe, opting to reward Joe for his efforts, making no mistake. 5-2

As the visitors continued to crumble, Ben Grogan completed his brace, Paul Gavan turning provider, for Grogan to bend his shot round the keeper into the corner of the net. 6-2.

Capping off the contest was Oliver Tasker, calling for the ball on the edge of the box, a quick turn and the drop of a shoulder, before unleashing a trademark Tasker rocket, leaving the keeper with no chance. The culmination of years of work on the training ground finally coming to fruition. 7-2.

Man of the Match: Jay Jones