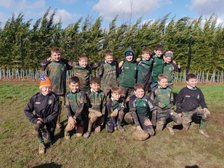 Sandal Festival
Two teams trekked to Sandal for the annual festival to be met with freezing cold rain and sleet conditions.
The Scunthorpe Greens started off well with a clean win over Ripon where we dominated from the start, Frary running down the wing for our first score followed up with one from Bycroft with good support from Jones K. Bycroft managed to steal the ball in a maul popping off to Thornton to grab our third try.
Old Rishworthians were a slightly harder team with good defensive however pressure from the Greens resulted in them making errors which were capitalised upon with Conroy running the pitch to score. Some great tackles put in constantly by Jones I and Hart however the opposition managed to sneak through to score.
Hart forced his way towards the try line with 3 Rishworthians hanging off him however went down a metre from the line, passed out to Thornton who was also tackled and went down just short but a quick thinking Jones I grabbed the ball and stretched out to grab the score for the team.
The Greens final game against Sheffield Tigers was the hardest game as the lads were very cold and tired. They put up a great fight but conditions did appear to be getting the better of them as the pitch had turned into a muddy quagmire.
Tigers opened the scoring with 2 quick tries but we persevered with Bycroft passing out to Hart via Conroy for Hart to gain one back. The Tigers managed to rip the ball from Frary and score however a last effort from Jones K who ran down the wing but was tackled into touch before getting the ball to ground. The final score of 4-1 did not reflect the level of play shown by the Greens as they truly played well and gave their all.

The Scunthorpe Blacks started against Stanley Rodillians with Carter opening the scoring followed by one from Wilkinson. The opposition were still chomping at the bit grabbing a score of their own but a hard tackle from Quibell forced them to drop the ball which was scooped up by Clarke to score. Neither team relented in their tackling so no headway made with their end score being 3-1 win.
Burnage Team was a different kettle of fish altogether with some big lads being in their team. Despite giving it their all, Burnage dominated and a 2-0 loss was on the cards.
Castleford Team was next for the Blacks which was also a hard game with the opposition dominating again. The Blacks struggled in the wet cold conditions and couldn’t gain momentum suffering a 3-0 defeat.
Their final game of the day against the host team Sandal was in kinder conditions where Carter opened our score sheet quickly followed by Sandal. Due to injuries sustained in the Blacks team from previous games, sub Hart was on for Scunthorpe who grabbed a score barging over the line but again Sandal followed up to equalise.
Some good handling between Quibell Proctor and Stow got us within scoring distance Stow weaving his way between their players to the line. The lads put on a great display gaining ground with Wilkinson and Quibell putting in the tackles. Proctor managed to get his hands on the ball but was brought down short of the line. A 3-3 draw was the end result.
The lads enjoyed the rugby despite the freezing cold and worked really hard without any complaints. They were a credit to Scunthorpe !!