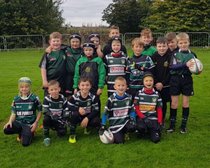 Match Report by Netty Conroy
A day out to Old Brodlians festival kick started our under 9 start to the season moving from tag to tackling and they definitely showed the Yorkshire teams they meant business.
Team Thunder started off against Sheffield with some good passing and runs from the players allowing a quick score by Hart which was followed up soon afterwards by a loose ball being scooped up by Quibell who passed to Grundy to score another. Some good tackling shown by Jones K and Jones I put pressure on Sheffield who dropped the ball in a tackle to allow Grundy to put down another. Sheffield failed to take down Hart who barged his way through the opponents but a knock forward allowed Sheffield the ball to score which was soon followed up with a second. A good run by Jones K with a pass out to Waldron and onto Quibell allowing him to score finishing their first match with a 4-2 win.
Their second game against Huddersfield 1 also got off to a good start with the young greens forcing Huddersfield into touch a couple of times however Huddersfield managed to score in the corner which was again quickly followed by another following a couple of errors. Tackles put in by Waldron Quibell Hart and both the Jones boys managed a turnover ball and Jones I got the greens a score on the sheet. Huddersfield stormed through our line and left us standing to get another try but Hart passed to Grundy who managed to scrape us another try. Frary picked up a loose ball and passed out to Grundy but things didn’t go to plan. We managed some fab tackling from Jones K and Quibell but not enough to stop them making one further score resulting in a loss at 4-2.
Next was Rochdale 2 which was a messy game to say the least with errors being made by both sides from the whistle. Both teams seemed to want to play in touch however we finally managed a couple of scores from Hart and Proctor before changing ends. Rochdale put in a quick score and with some good tackling seen from all players kept the scoring low but a win of 2-1.
Old Brods was up next where Proctor and Waldron pulled out the stops in tackling the opponents and a pass to Grundy who danced his way to the line to score. Tackles put in by all players produced a turnover ball allowing Grundy to get another but Brods managed a try of their own resulting in a 2-1 win to Scunthorpe.
Team Thunders last match against Sandal 2 saw a tiring young greens team producing uncharacteristic handling errors allowing their opponents to get quick scores. Quibell managed one for Scunthorpe however it wasn’t enough and Sandal snuck through our line and got another leaving us defeated at 5-1.

Team Lightnings first game was against Hull Ionians where strong tackling early on produced a score from Thorton quickly followed up by second from Conroy. Hull scored due to our knock forward but Stow soon got one back. A tackle by Thornton saw their Hull player drop the ball which was scooped up by Conroy who ran on to score in the corner. Hull failed to be put off and gained another try despite great tackles by Wilkinson, Conroy and Sitek. Final score of the first match was a 4-3 win.
Game 2 against Huddersfield 2 got off to a fantastic start where from the off Conroy whistled through and ran straight down the touch line to score from the whistle. Tackles made by Clark, Murray and Conroy with a quick pass to Wilkinson who was unfortunately forced into touch by the opponents tackle. Great game play seen from Hewitt and Murray with some quick passing and teamwork. Stow and Conroy both managed to actually dive onto the try line flying to make their scores with the score ending in a win of 4-1 with Stow getting the final try just before the final whistle.
Next was Rochdale 2 which was our hardest match out of the five played. The opponents got a score early on but some fab passing between Conroy, Stow, Clark and Wilkinson allowed Conroy to score in the corner. The game got a bit messy with both sides making handling errors but Rochdale came out on top by getting 2 scores on their sheet. A final score from Stow before the whistle but still ended with a sad loss with a score of 3-2 but it was a very close game.

The penultimate game was against Sandal 1 where we showed some excellent tackling by the whole team gaining not one but 2 turnover balls before Sandal who were almost on our line to score when a pass was intercepted by Conroy who managed to run the entire length of the pitch to score for his team. A great set of passes made between Thornton, Clark and Wilkinson who managed to get the ball to Conroy to get another one down. Sandal were defeated with a 2-1 win.
The last game for Team Lightning was against Rishworthians. We started well with a quick score by both Conroy and Stow but Rishworthians managed to put one down too. Murray and Kyte made some great efforts in the tackling with turnover ball being forced due to tackles made by Wilkinson, Conroy, Stow and Thornton. A flurry of passes between Murray, Conroy and Sitek near the score line passing out to Thornton who ran to the line banging into the corner flag. The opponents managed to squeeze past our defence on 2 occasions ending in a draw at 3 all.