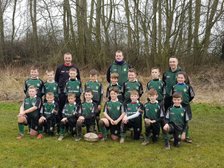 A HUGE WELL DONE to all of the teams who all played with spirit and enthusiasm. We had a great day out and all came away with medals, big smiles and most of the mud from the pitch!

The under 9’s took 2 teams, Scunthorpe Black and Scunthorpe Green to Selby Festival today for some very muddy games.

The Blacks first game was a tough one against Rochdale which started with good team passing that allowed Carter the first try for Scunthorpe. A poor restart led to a turnover ball to Scunthorpe and Conroy made a great run down the line but unfortunately he was pushed into touch giving the ball back to Rochdale. They didn’t keep the ball long though as Conroy put in a big tackle taking the opponents into touch this time. From the restart Hart made a run down the field with the rest of the team hot on his heels, he passed to Conroy for him to take the ball over the try line. Great support from the whole team. Some messy passing followed from both teams which turned the ball over several times to each other but eventually Rochdale did manage to get a try just as the whistle blew. Final score Scunthorpe 2, Rochdale 1.

Meanwhile the Green team were playing their first game against Sheffield Tigers which was also a tough one resulting in a 3, 2 loss. Our tries came from Proctor and Stowe. The Green team made some great tackles with Quibell, Jones K, and Stowe gaining a 6 tackle turnover.

The next game was for the Black team against the hosts, Sandal. Sandal started but a 6 tackle turnover gave the ball to Scunthorpe and a pass to Hart for him to get the first try of the game for Scunthorpe. From the restart a forward pass gave the ball back to Scunthorpe for Carter to make a great run through the field but he was tackled on the line and lost the ball. A restart on the line resulted in a dropped ball that Barnbrook quickly grabbed and put down for our second try. The third try came from Conroy picking up another loose ball and passing to Bycroft for him to barge through Sandals defence eventually passing the ball to Conroy to score. Barnbrook jumped on the next loose ball and took it almost to the line but a great tackle from Sandal caused him to drop the ball. Sandal couldn’t keep hold of the ball though and dropped it on our line for Jones I to jump on it for a try. Another 6 tackle turnover ball back to Scunthorpe and a pass to Conroy for him to run the length of the pitch to score. Our next try came following fantastic passing down our line onto Wilkinson for him to score. The final try of this game came from an interception by Conroy of a Sandal long pass for him to run down the line to score. An extremely muddy win of 7 tries.

Another fast game followed for Scunthorpe’s Green team giving a 6, 2 win against Moretown. The first 2 tries came quickly from Jones K and then Thornton. After a 6 tackle turnover ball was eventually awarded Stowe took the ball down the field and scored our next try. Despite great tackles from Scunthorpe Moretown managed to get their first try. Scunthorpe’s restart though gave a good pass to Proctor for him to score. Great defence work from Scunthorpe with Quibell and Grundy putting in big tackles and despite a huge tackle from Hatfield on the line Moretown somehow managed to get across the line to score. Scunthorpe’s next try followed quickly from Quibell and the final try was from Thornton from an intercepted pass.

The next game was for the Black team against Old Brods. We started the game with some good passing through Conroy, Hart, and then onto Sitek to get the try. Scunthorpe’s second try came from a loose ball picked up by Conroy. Following a few handling errors Old Brods then got their first and only try. A good pass to Jones I at the restart for him to run down the field and score. Some messy played followed with several knock-ons from both teams again but the final try came when Conroy picked up a loose balls passed onto Hart for him to take the ball over the line to score. Giving Scunthorpe another win at 4, 1.

The Greens third match was against Selby which was a 3 nil win. Selby started but Stowe put in an awesome tackle taking the opponents into touch and winning the ball for Scunthorpe. Stowe then showed us some great dodging skills as he stormed through their defence to score a try. Proctor also put in a brilliant tackle winning us the ball back after the restart. Proctor then made a good pass onto Jones K but he was pulled into touch so Selby won the ball back, however they couldn’t keep hold of the ball and Stowe picked up a loose ball and ran over the line to score again. After Scunthorpe winning the ball again from the restart we were denied the try at the line following a six tackle turnover for Selby. Jones K put in the tackle taking Selby into touch and winning us the ball back for Hatfield to score from the restart on our line.

The Blacks final game was against Sheffield Tigers. This game was quite scrappy with forward passing and interceptions from both sides but some great tackling as well. The game was drawn 2 tries each with Scunthorpe’s tries from Conroy and Wilkinson.

The Green team still had 2 games to play, this next one being against Roundhegians. Another scrappy game with a 5, 3 loss for us. Roundhegians scored first following an intercepted pass. Scunthorpe’s Green team responded with a fantastic long pass from Jones K to Stowe for him to run the field and score. Thornton dived onto a loose ball and quickly passed onto to Clark and then onto Stowe but he was tackled on the line but then quickly pass onto Thornton for him to score the try. A few miss tackles at the other end of the pitch gave the Roundhegians the next 2 tries. Further good passing between Proctor, Clark and Quibell didn’t end with a score though as Roundhegians made some good tackles. Quibell was also getting in tackle after tackle to defend for Scunthorpe forcing errors from the opponents and a dropped ball gave the ball back to Scunthorpe. Proctor made some good dodging moves through the field but was brought down on the line to be denied the try. Our third and final try came from Stow after a great pass from Jones K.

The Green teams final match was against Rochdale which was probably the most scrappy of the day with a 3, 1 loss. We put in some great tackles which seemed to go on and on but we couldn’t seem to get the 6 tackle turnover ball. Our only try came from Stowe following a good passing streak through the team.

A HUGE WELL DONE to all of the teams who all played with spirit and enthusiasm. We had a great day out and all came away with medals, big smiles and most of the mud from the pitch!