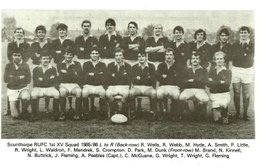 When You Go Down to The Woods to Play

The Greens showed tremendous character to overcome a very useful Peterborough Lions who rarely lose on their own patch, to take another step toward promotion.
Dealt a blow when captain Tom Foster had to withdraw because of illness the Greens had to reorganise their back line with Steve Johnson moving to fly-half, Colin Chapman to full back and Mike Smith to wing. Si Weller started at 2nd Row and Nick Sydall again gave an assured performance in the front row.
On a wide pitch, though heavy underfoot, the Greens showed their intent from the start by taking the game to the opposition at every opportunity.
Throughout the first half the Greens dominated the Lions forwards even though they were conceding an overall height and weight advantage. The scrummage was particularly effective and on a number of occasions the opposition were forced to concede penalties.
Dave Garbutt carries from no.8 were particularly effective.
The Greens forwards and backs generally complemented each other, constantly putting the Lions on the back foot. Following a line-out win by the ever consistent Jake Barron the ball was moved across the backs eventually to Ollie Wood who raced in at the corner to register the first score, to lead 5-0.
The Greens continued to press for another score but conceded a penalty for an offence at a ruck which was converted by Will Carrington for the Lions to take the score to 3-5.
The Greens had a few further opportunities to increase the scoreline notably when winger Mike Smith. latching on to an excellent kick ahead from Steve Johnson, was hauled down metres short of the try line.
The half-time score stood at 5-3 in favour of the Greens.
Mike Smith had sustained a head injury in his attempt to score towards the end of the first half and was replaced by Rory Randell-Tyrell early on.
The second half saw the home side initially enjoy territorial advantage but the resoluteness and collective defensive skills of the Greens enabled them to continually stem the tide.
Following a mazy run by Colin Chapman the Greens were awarded a penalty which was kicked to the corner. From the resultant line-out the trademark catch and drive resulted in yet another well taken score by James Dyson extending the lead to 10-3.
The Lions were coming back more and more into the game without really threatening to score a try however they were rewarded with a penalty again converted by Carrington to take the score to 10-6. Continued pressure by the Lions coupled with some uncharacteristic errors by the Greens allowed the home side to narrow the gap to a single point following yet another penalty by Carrington 10-9.
The Lions are proud of their home record and continued to try to press home to advantage but the Greens showed great discipline and Steve Johnson put in some excellent relieving and attacking kicks to release the pressure.
From another line-out catch and drive the Greens marched their opposition all of 20 metres for the try machine who is James Dyson to touch down yet again to take the score to 15-9 to the Greens.
Keiron Bournes replaced Dave Garbutt for the final quarter.
In the final 10 minutes the home side trough caution to the wind and attacked the Greens at every opportunity but such was the discipline and commitment of the visitors that all of the home sides efforts to secure a winning score proved fruitless.
The final score was 15-9 to the Greens.
The defensive quality of the Greens was exemplary on the day and to deny the home side a try was an outstanding achievement typified by a great turnover of possession by James Dyson with virtually the last play of the match.
This victory was gained against one of the major teams in the league and can only prove to boost the confidence of the players for the remaining six fixtures.