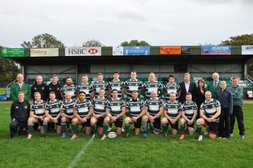 Back to winning ways for the 1st XV

Following back to back defeats, The Greens faced a Sutton side that has lost some of it’s squad from the previous two successful seasons but are nonetheless are still a very competent outfit.

With pack leader Nick Syddall still sidelined with his rib injury, Scunthorpe once again had Chris Hewitt as back row cover.

The visitors had just the start that they would have hoped for when referee Richard Swaffield penalised the home side at the first scrummage for Ben Morgan to add the 3 points with barely a minute on the clock.

The Heslam Park boys were quick to respond when they gained possession and put their visitors under immediate pressure. Following a few powerful phases, the ball was moved out to Tom Foster who broke through the opposition defensive line and cross for the first try. Steve Johnson added the conversion and Scunthorpe had taken the lead by 7 points to 3. With their tails up the home boys played the ball to the corner and from the resulting lineout they drove over for Jake Barron to get the touch down. Johnson again converted for a now 14 points to 3, advantage, after 9 minutes.

The momentum was very much with the home team and Scunthorpe were awarded a penalty try when a series of scrums went down close to the visitor’s line. Johnson again did the necessary and the scoreboard had a rosy glow at 21 points to 3 for the Heslam Park side.

Sutton were gradually coming back into the game but the home defence remained steadfast and it was not until the 36th minute that the visitors were awarded a penalty which Morgan was unable to convert. The Greens now produced their best move of the match when they attacked for half-way with the ball passing through multiple hands before Ash Dibden completed a delightful move with the try. Johnson was unable to convert but things looked fairly comfortable at 26 points to 3 and half-time looming.

In injury time in the first half the visitors had a scrummage 5 metres from the home line. They managed to control the ball in a retreating scrum enough for the No. 8 to make a pick-up but in attempting to drive forward he fumbled his pass which went forward. The referee then ran under the home posts to award a penalty try which seemed quite bizarre, claiming the home No. 7 had strayed off-side.

The half-time whistle sounded giving both teams and the referee a much needed break.

Scunthorpe came out for the second period with great sense of purpose and having gained possession from the kick-off moved the ball to the left sensing an overlap. The final pass was however intercepted by the alert Nathan Burchill who ran in the try from half-way. Morgan was again unable to convert but the visitors had reduced the deficit to 26 points to 15.
Play seemed to become rather sloppy from both teams as they attempted to come to terms with some eccentric officiating. The Scunthorpe game management seemed rather strange as they played like the team chasing the game rather then just controlling field position and putting the visitors under pressure.

They did however manage one repost, when the pack drove over the line for a Dave Garbutt touchdown after 33 minutes of the second period. Sutton however had the final say with a close range score from Burchill. This score went unconverted with the final whistle not far off. During this period late in the game both teams had a player binned adding to the frustration of all concerned.

This was not a classic despite a good first half display but it did however bring a 5 point win for the home boys with a final score-line of 31 points to 20.

Next up for Scunthorpe is an away trip to runaway league leaders South Leicester which provide a test of ability and character.