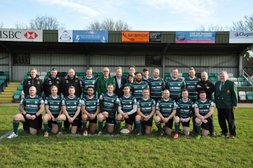 The Taming of The Lions at Heslam Park

The Greens entertained second placed Lions at Heslam Park in a first ever meeting of the clubs in Scunthorpe. The earlier fixture at Peterborough resulted in a 48 points to 31 victory for the Cambridgeshire boys.

Scunthorpe had Guy Michajluk, Nick Syddall and Will Harrison returning to the starting line-up and Dave Garbutt also back but on the bench.

The game at Peterborough started with a home team score straight from the kick-off and it seemed that The Greens were still on the bus as the Cambridgeshire boys clocked up 30 points in the first half-hour. Today it was the turn of the Heslam Park outfit to sprint out of the traps when they won a penalty after barely a minute of play. The usually accurate Steve Johnson pushed his kick to the right of the posts. Scunthorpe however maintained the pressure and with the forwards driving close to the Lion’s line, Matt Probert got the touch-down. Johnsons conversion struck the upright and bounced clear but the home boys had made the first breakthrough.

The Lions are not in second place in the league by accident and they soon forced their way back into the game bringing their powerful runners into midfield to test the home defence. They won a penalty after 18 minutes which Will Carrington was unable to convert. They did however maintain pressure and stretched the home defence winning a penalty after 28 minutes which Carrington converted to put his side on the board.

It was all Lions at this stage with the home boys having to resort to desperate scramble defence. The Greens then had Nick Dyson and Nick Syddall binned within a minute of each other to go down to 13 players with 5 minutes to go until half-time. The Lions opted for a scrummage but were bitterly disappointed to be turned over which let the home boys off the hook and the 13 Greens made it to the half-time whistle without conceding a point. So the interval arrived with the scoreboard at 5 points to 3 to the home side.

The Lions maintain their pressure from late in the first half and although Scunthorpe were back to full complement, It was the visitors that took the lead with another Carrington penalty, in off the posts, after 11 minutes to take the lead for the first time. Scunthorpe regained the advantage after 18 minutes through a Johnson penalty at 8 points to 6.

The game ebbed and flowed as first one side then the other gained an advantage. Scunthorpe still had the upper hand in the tight but The Lions used their Captain and their player coach in the shape of Chris Humphreys and Darren Fox to good effect in ball carrying and at the break-down. It came as no surprise that pressure eventually led to a try for the Lions when powerful second row Wade Schoeman forced his way over after 20 minutes of the second period. Carrington added the extras and the Lions held a 13 points to 8 advantage.

Johnson had an ideal opportunity to reduce the margin on 22 minutes but missed the kick. Scunthorpe gradually gained the initiative with some astute kicking from Tom Foster to give his forwards the chance to exert pressure.

Going through several phases in the away ‘22’, the Lions defence was eventually breached by Foster for a score at a crucial stage of the game. Johnson was unable to add the extras but the teams were now level with 8 minutes of normal time left to play. During the build up to the Scunthorpe try, the referee Louis Biggs, had managed to get entangled in play and was down with an injury for several minutes. There was much touchline discussion about what the result would be if the ref was unable to continue, with play having reached the 72nd minute. All this turned out to be academic as Mr Biggs was fit to continue after treatment.

The effort from the Home pack had been immense and with the Lions centre Gediminas Marcisaukas seeing yellow for a high tackle, The Greens upped the pressure, setting up another mighty driving effort from which James Dyson was able to cross the line, half-way out to the left of the posts. Johnson slotted the conversion and the Home boys celebrated a great win as the referee’s whistle sounded.

This was a game that was always going to be decided by small margins but it was the mighty effort of the Scunthorpe eight that won the day by 20 points to 13. They were ably supported by the rest of the boys with some outstanding defensive work.

Match Report from The RUGBY Paper

Scunthorpe stunned another one of the leagues high flyers as they defeated promotion chasing Peterborough Lions 20-13
Trhe Lincolnshire side sent shock waves through National Three Midlands when they ended South Leicester's long winning streak earlier this season, and they were at it again at Heslam Park. This time it was Peterborough Lions who struggled against Scunthorpe.
Two Will Carrington penalties saw the visitors move into a 6-5 lead following an early score from Scunthorpe. But their failure to make numerical advantage count when Scunthorpe were reduced to 13 men proved decisive.
A superb try from Tom Foster cancelled out Will Shoman's score to level the things up at 13-13 before James Dyson went over with four minutes remaining to secure the win