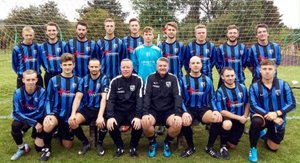 Win at last for battling Reserves

Selston Reserves welcomed Awsworth Villa Reserves to the Parish for a division 1 league game. Jake Simpson returns in goal and Jamie Hassell is still serving a suspension so manager Lee Widdowson step in at centre defence. The lads were looking to up their game from the last outing but it was the away side that had started the brighter with a good chance after 5 minutes. A ball into our box was volleyed over the bar from close range and the striker should have done better. Awsworth were taking the game to the home side and should have scored again when another striker blazed the ball over from close range on 17 minutes, another let off the lads. It was a very tough game with both sides putting their foot in where possible. Selston couldn't really get anything going in the final third and should have been behind again when Villa missed another golden chance to take the lead with a miss from close range on 25 minutes. These misses did come to bite Awsworth on the backside as Tom Widdowson broke down the left, cut in to the box and unleashed an unstoppable shot into the top corner for 1-0 on 35 minutes. Young Widdowson was causing Awsworth a lot of problems down the left with his pace and trickery but we couldn't quite nick another goal to stretch our lead. Half time came and the lads were a bit fortunate to be a goal to the good with Awsworth guilty of missing some really good chances and we could have easily gone in trailing.
Second half then and the Villa started well again and were on level terms on 50 minutes when a cross wasn't dealt with and this time the striker finished from close range for 1-1. The match was still as hard fought as ever and a few yellows cards started to be given out by the ref. On 56 minutes Awsworth had a free kick on the edge of our box just to the right, the lad stepped up and hit a curler the was heading in only for Jake Simpson to brilliantly tip around the post to keep the score level. Very tight and end to end Selston were playing a lot better second half and started to create some good chances and took the lead on 71 minutes when Joe Marson played in Jordan Black who's first shot was well saved but he was first to react to his own shot a nodded the rebound home for 2-1. A few minutes later we were in again when Klarke Greenham slipped in Black again and he slotted home to make it 3-1 on 75 minutes. On 77 minutes Jamie Shaclock replaced the injured Joe Toon and Callum Howell replaced Luke Wigley. Even at 3.1 I didn't think the match was over as Awsworth were still capable of creating good chances and scoring again. Selston though were definitely up the battle this game and were working hard to keep there lead. Awsworth though wasn't going out with a whimper and made the last 10 minutes very nervy for the lads when they scored again with a close range finish to make it 3-2 on 80 minutes. The match could have gone either way at this point, either we extended the lead or an equaliser for Awsworth. Callum Howell had one cleared off the line for Selston and the lads were trying their best to see out the game but Awsworth broke from our possession and they were through on goal. Anthony Clarke tried to get back but fouled the player and received his second yellow and Awsworth had a free kick on the edge of our box. The free kick came to nothing and it was the final act in a tense finish to the game. The Reserves had finally stopped the rot with a hard fought win. Awsworth though only have themselves to blame as they were very wasteful in front of goal and on another day would have probably won this game. Selston were back to winning ways and it felt good. We didn't play anywhere near how we can with the ball but where much stronger in the tackle and everyone had put a shift in to make up for the shambles in our last defeat. MOM for Awsworth went to Jake Brookes and MOM for Selston was awarded to Klarke Greenham. Lets keep all the hard work going and get up the table to finish as high as we can.