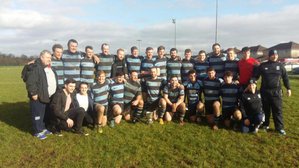 *Our U13s have a league quarter-final v Old Crescent in Coonagh on Sunday on the main pitch. This is a hugely important game for the u13s so all support for on the morning would be most welcome!! Looking forward to seeing some great rugby – see you there!*

As we start into our weekly rundown of rugby played in the club this weekend, first mention must go to our fantastic Thirds who won the McInerney Cup on Saturday! We travelled to the canal bank to play Richmond in the final and the lads came out all with guns blazing, putting on a fantastic team performance which saw them overcome Richmond by a score line of 26-19. The try’s came from Johnny Bedford, Shane Ryan and Darragh O’Doherty who also kicked three penalties and one conversion. We must give a special mention to Ger Broderick who has been playing with the Thirds for almost 10 years and finally lifted a trophy with the thirds! It was not only a brilliant occasion for the club, but a very special occasion for Ger who has been a great servant to the club over the years. Massive thanks must also go to Percy Ryan and Barry McNamara for all their hard work throughout the season so far and also to Brendan McNamara. The Thirds will be looking forward to upcoming the Webb Cup and judging on the performances of the lads so far this season, so will the rest of the club! Well done guys!!

Our Firsts took to the road this weekend and travelled to Cork to take on Dolphin in the AIL. We were missing a few familiar faces from the line up and were unfortunate to lose Duncan Casey to illness before the match kicked off. The result wasn’t what we wanted on the day but there is still plenty to be positive about. We have remained in 8th place on the table and will be looking forward to getting back into the swing of things when we welcome UCC to Thomond Park on the 04th of March after a well-earned break this weekend. Find the match report of last weekend’s match here.

It was similar fortunes for our Seconds who bowed out of the Junior Cup on Sunday in a miserable Coonagh. After a slow start we conceded a penalty and an unconverted try. We were happy to welcome a few new faces to the side and it has to be said that the lads never dropped the heads and continued to fight until the very end. Cashel were a good side who took their opportunities well. The final score read 17-9 to Cashel with Barry McGrory kicking all of Shannon’s points. Charlie Carmody also impressed on the day. It was great to welcome Dylan Murphy back from his injury which saw him miss most of the season. He played a strong 40 minutes and we are delighted to have him back, we hope to see him push on well in the next few weeks.

Our Ladies were in the league playoffs and welcomed Bantry to Coonagh on Sunday. A first minute try from Ciare Casey O’Halloran, converted by Sarah Cullinan gave the girls a boost and they launched an organised attack from the kick off. A second try from Ciara in the sixth minute and another conversion from Sarah meant that the ladies were really in the swing of things. Play levelled out for the next ten or so minutes when Sarah Cullinan made a great break and went over the line for an unconverted try leaving the score 19-0 after 20 minutes. Unfortunately, in the next play the Bantry Number 8 went into contact awkwardly and the match had to be abandoned as it became apparent that she had broken her ankle. We would like to wish Gillian Coomb all the best for a speedy recovery after her surgery. The score stood at the end of the match and the Shannon girls will go on to play Tralee in the next play off.

This week we have been sent a match report for our u11s from Adrian McKenna, thanks Adrian!

Cracking performances by the two Shannon RFC Under 11 teams last Sunday at near neighbors Thomond RFC in their blitz matches against Thomond, St Senans and Bruff. One Thomond punter was overheard saying "They were great matches - I've paid good money down here to watch rugby and seen far far worse". From the off our boys were committed, organised and stood together, tackling everything in sight, not letting the opposition settle on the ball and scoring some fine tries in the process.

First up was our black team with a 1-1 draw against St Senans which they then followed up with a 3-0 victory over the hosts. Our blue team lost out on a 1-0 score line against Bruff A but quickly made amends with a gritty 2-1 win over Bruff B defending their line at the very end and turning over the ball despite Bruff pummeling away on the Shannon line. The final match saw a combined Shannon team take on Thomond and running out 3-0 victors.

Some excellent performances throughout from Ronan Ryan, Justin O'Brien, Matthew Collopy, Tomas Williams, Jeff Coll, Tadhg Mullane and Cathal Glynn but it was the combined team effort which show this group of players possess the X Factor. Coaches Ian Coll, Tom Hackett, Mike O'Brien, Adrian McKenna and Alun Williams are all delighted with the performances and looking forward to seeing the Under 11s build on this as they prepare for the Shannon RFC Good Friday rugby festival.

The lotto for the last week showed no winners.