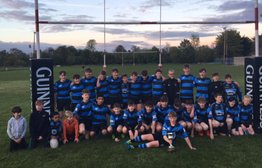 It was heartbreak for our Ladies on Sunday as they were beaten at the final hurdle by Thurles in the Munster Cup final. It was everything a final should have been with both sides bringing everything to the table. Shannon were the first to put points on the table with Lea O’Dwyer going in for an early individual try which she ran in from the half way, this went unconverted. Thurles regrouped and although Shannon retained possession for long spells, they went in for a converted try after 20 minutes taking the lead, 7-5. The second half didn’t show much in the way of either side relinquishing possession and there were some great hits going in. A lovely move mid-field from the backs saw winger Aisling Duhig go in for a try in the corner and Shannon again took the lead 10-7. Thurles kept up the pressure however and it wasn’t long until they worked their way towards the Shannon line and pushed over for another converted try Leaving the score 14-10. As time ticked by the play largely remined mid-field as neither side budged or backed down, however this time Thurles had the majority of the possession. A last-ditch effort from Lea O’Dwyer, who made a great break, saw a spark from Shannon but it wasn’t too be and time ran out leaving the score 14-10 in Thurles’ favor. A disappointing end to the season for the ladies who have had a successful year overall. From having to amalgamate with Nenagh last year, the ladies have progressed to have a solid 30-woman squad who finished third in the League and got to the final of the Munster Cup. A massive thanks has to go to Mick McLoughlin for his time and dedication as coach of the ladies section this season, the girls will be looking forward to welcoming more of our underage players up to the senior set up next season. There is plenty more to play for but there is a tour to Amsterdam to look forward to first!

Our u20s were meant to be in action in the Cup final last Wednesday but the match was called off to be refixed at a later date.

Hard luck to our Shannon/St. Senans u15s team who were beaten by Nenagh in the North Munster Cup Semi-final in Nenagh on Tuesday.

Well done to the U14s on their Cup win on Wednesday night vs Ennis.The boys had to dig deep for this one, having gone behind to an early try. Ryan Naughton settled the early nerves by finishing off a great move to go in the corner. After going behind again, Conor O’Brien stepped up to barge his way over for a cracking try. With the score at 10-15 down going into the last few minutes, the pack strung together some great phases of play and Eugene Fokins was in the right place to break 3 tackles an go in under the post. Paddy Hassett converted leaving us 17-15 ahead and the boys played out the last minutes comfortably. A great bunch of lads who have had a great season including a successful tour to Turin. Our injured captain Konrad Jezierski and captain on the night Conor O’Brien accepted the Gus O’Driscoll cup on behalf of the squad. (report from Darragh Naughton)

Our u18s Shannon/St Mary's also advanced to the Munster Open Cup Final, beating Bruff 32-15 in Grove Island. The match was a great display of fast paced, dynamic rugby and really was an entertaining affair from start to finish. The lads ran some great lines to go over for some well worked as well as individual tries. Keeping the momentum up the u18s produced some great offloads to win the encounter comfortably. They will be in action in the closed cup on Monday and the Open Cup final date will be set soon. Come along and support the guys, there is some great talent on display!

The lotto for the last week showed no winners.

The spaces are very quickly filling up for our Shannon RFC Summer Camp for boys and girls age 5 to 13. You can register in the cabin from Good Friday until the end of the season email summercamp@shannonrfc.com, PM the Shannon Underage Facebook page or text Mike McInerney at 086 – 8064179.