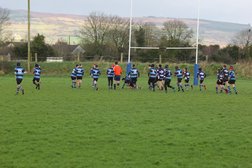 Thanks to Tony Deedigan for the photo

Short notes this week as most of our senior teams had a well-earned week off.

Our seconds were the only senior team in action and lined out against Old Crescent in the Munster Seconds League in Coonagh on Sunday. In miserably cold conditions, we took to the pitch where the weather prevailed, making even the simple things difficult. Passes didn’t go to hand with the wind wreaking havoc all day. It was great to see Robbie Deegan back in action after an injury sustained at the beginning of the season saw him side-lined until now, and we wish him all the best now that he is back playing. The score didn’t go our way on the day with Old Crescent scoring a well worked try late in the second half and we ended up on the wrong side of an 18-12 score line. The seconds are back in action this weekend with a match v Young Munster in Coonagh on Sunday.

It was heartbreak for our u13s as they bowed out of the league on Sunday. They also played Old Crescent in Coonagh. It was a closely fought affair with Old Crescent scoring in the dying minutes of the match to win the game. As always though, the u13s put on a fantastic display of rugby and we are so proud of how they conducted themselves not only on the pitch but afterwards too. This team has gone from strength to strength this season and they have progressed immensely. They have gelled so well and have become a great team with the comradery that exists between them evident for all to see. There is still a lot to play for this season with the Cup looming as well as other tournaments so its onwards and upwards for this great team.

We are again running a pre-match dinner before this weekend’s match v UCC in Thomond Park. The firsts will be back in action after a break and the club are offering the usual fantastic value including a three-course meal and match entry for only €20. The last few matches have been sold out and there has been fantastic atmosphere around the club, come along and lend the lads your support!

The deadline date is looming for this year’s Champ or Chimp entries! The deadline in the 10th of March and by now most of you should have gotten the email that was circulated with information on the betting for 17 of the 18 events, if not drop me an email and I will forward it to you. Don’t miss the deadline to take part in this year’s competition, you will be missing out on one of the clubs most entertaining fundraisers!! Find the online application here