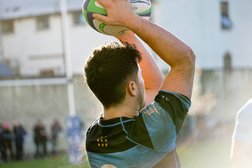 The return fixture kicks off the second half of the AIL. Photo from Richard Mullane

It was Galwegians who kicked off, the second half of the AIL season in a cold and blustery Thomond Park on Saturday last. Shannon emerged with a different side that travelled up before Christmas welcoming back some of our more regular faces. A kick that missed touch, saw Galwegians in possession of the line out and within two minutes they were awarded a penalty for a Shannon off-side and were unlucky to miss. Galwegians recovered from the kick off and after a turnover a piece and a Galwegians knock on, we went into the first scrum in possession on our 10. Luke O’Dea got clean ball from this and put up a Garryowen bringing us to the half way line. A ball dropped back and recovered by Greg O’Shea made it’s was to Fionn McGibney who kicked deep. After a Shannon penalty kicked to their 22 and some scrappy play, we emerged from the first ten minutes with a penalty for Galwegians hands in the ruck.

Unfortunately, the ball just skimmed the post and Galwegians employed some quick thinking to gather the ball and clear their line. A drop out that went out on the full saw us scrum down in the Galwegians half, with Fionn McGibney distributing the ball and Lee Nicholas leading the charge as he crashed up the center. Riley Winter was next to get his hands on the ball and a great break saw him ship the ball back in to Will Leonard who was just stopped short of the Galwegians line. We then gained a penalty for Galwegians off their feet which Fionn McGibney slotted over with ease. Galwegians received from the kick off and ran the ball back up and into our half. They kept the ball tight and gained a penalty on our 22 just left of the posts. They missed this penalty leaving the score 3-0 at the end of the first quarter.

Two minutes later saw us disrupt the Galwegians lineout with a steal and we kicked to our 10. Clean ball off the top of the lineout allowed Luke O’Dea to break with fantastic support to back him up. Another Shannon penalty for Galwegians hands in the ruck saw a yellow administered by the ref. We missed touch from the penalty but Stephen Fitzgerald was on hand to recover the drop out and we took the ball back up. A dropped ball saw Galwegians recover and a spot of aerial tennis followed resulting in us running the ball from our 22. A Jack Stafford box kick was returned to Luke O’Dea who made sure of touch. Galwegians took the lineout and they kicked to alleviate pressure, again Stephen Fitzgerald was waiting and linked up well with Greg O’Shea who broke the line and found Fionn McGibney running a great support line. The ball was dropped back but Wegians managed to turnover knocking on in the process. We scrummed down on their 5 and Brian Downey made a solid carry from the back. Jack Stafford saw an opportunity from the back of the ruck and quick footwork carried him over the line for a great try. This was converted by Fionn McGibney at 31 minutes bringing the score to 10-0 to Shannon.

The remaining ten minutes saw Wegians camped in our 22 and attacking around the corner. The Shannon defense held tough and patience saw us turn the ball over and kick ourselves clear of danger. A crooked ball in the lineout had us back in possession and as the heavens opened and the rain beat down, we launched an organised attack. Wegians managed to scoop a turnover but Greg O’Shea was on hand to win the ball back. We gained another penalty at the scrum after which, the ball was kicked out signaling the end of the half with the score remaining 10-0.

We kicked off the second half and within a minute gained a penalty for Wegians coming in off their feet. We kicked to their 22 and set up a solid maul off the lineout but unfortunately dropped the ball back. Wegians picked and went off their scrum but were well covered. They box kicked and the ball went out on our 10 gifting us a lineout. Wegians were quick off the mark and stole the ball gaining a penalty minutes later for Shannon hands in the ruck. They kicked to our 22 and took a solid line out, spreading the ball wide. Niall Mulcahy put in a fantastic hit as he chased down the ball carrier. Galwegians held onto possession and looked dangerous as they attacked around the corner. They gained a penalty at the breakdown and we retreated to our line. Jack O’Donnell was next to step up with a great covering tackle to stop Galwegians advances. Will Leonard was sent to the bin for playing the scrumhalf illegally through the ruck and Galwegians opted to scrum down on our line. The scrum was reset twice and the ref then awarded Galwegians with a penalty try, converted at 50 minutes leaving the score 10-7.

We gained possession from the kick off and kept the ball tight, using space widely. A kick from the back of a Galwegians scrum saw them gain a lineout on out 10. They got secure the ball and feed it out to the backs where Jack Stafford was waiting to put in a solid hit. Galwegians retained possession as they crossed our 10 but knocked on the ball. After the advantage brought us nowhere, we came back for a scrum on our 22 as Will Leonard returned to the pitch. Wegians won a penalty in the scrum, opting to scrum down again. The scrum collapsed again but this time Shannon were awarded the penalty. Stephen Fitzgerald made sure of touch but we overthrew the following lineout. We gave away a penalty after this for a high tackle and Galwegians kicked to our 10. A knock on in the lineout saw Galwegians scrum down as we entered the last quarter of the match.

Galwegians took the ball from the scrum and as they crossed our half, knocked on and we took the resulting scrum and got the ball out wide and chipped ahead. Galwegians dropped the ball during an attempt to recover the chip, and we hacked through twice before their full back got a hand to it and kicked them deep. Luke O’Dea gathered the ball and took it up at pace, Fionn McGibney was again on hand with great support followed closely by Greg O’Shea. The ball made its way to Stephen Fitzgerald who ran for the corner and was tackled and just got pinged for not releasing. They kicked to their own 22 and after an incident in the line out left us with a free kick, we found ourselves attacking the Galwegians line. A knock on saw Galwegians in possession in the scrum and great Shannon pressure forced the knock on at the back of the scrum. We were in possession of a 5-meter scrum on the Wegians line and gained a penalty here with the front row doing fantastically. Keith Kavanagh saw his opportunity and tipped and went for the line carrying a few players on his back as he touched down for a great try. Converted by Fionn McGibney, leaving the score 17-7 at 70 minutes.

Two minutes later a Shannon turnover halted the Galwegians defense and we kicked to their ten and won the following lineout, opting to kick deep. Galwegians brought the ball back up and again we forced a turnover only for the Galwegians scrumhalf to pull off a good poach and put his side back in possession. A line break saw Wegians gain momentum and Greg O’Shea did really well to pull off a solid covering tackle. Galwegians then knocked on and we scrummed down on our 5. We were awarded another penalty at the scrum but missed touch allowing Galwegians to recover and attack through their forwards. Ronan McKenna stepped up and put in a great hit, halting their attack and forcing a knock on. We were in possession of a half way scrum in which we gave away a penalty affording Galwegians the chance to kick to our 22. We stole the lineout and Keith Kavanagh kicked us to touch. Galwegains were in possession of the line out on our 10 and spread the ball wide. Greg O’Shea then saw a yellow card and they used the resulting penalty to kick on to our 5. They mauled off the back of this, gaining a penalty and taking a quick tip and go. The Shannon defense held tight and the forwards in particular, put in a solid display. As the clock ticked on into injury time Galwegians retained possession and spread the ball wide sending their out half over the line for a try. He converted his own try leaving the final score 17-14

It was a passionate display from the Firsts who kept the foot on the gas at all times throughout the match. They displayed a never say die attitude and kept up the intensity until the last seconds of the match. Oward to Dublin and Old Wesley this weekend where we hope our Firsts can emulate this performance again.