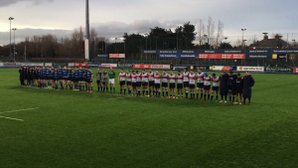 After a fantastic display against Galwegians the week before, we arrived to Donnybrook with an air of anticipation ahead of this match. A draw the last time we met in Thomond Park meant that we were going out with a point to prove and we weren’t going to be content with anything but a win. A minute’s silence before the match saw a deserved mark of respect for Gus O’Driscoll and Old Wesely’s Arthur Tanner after which Shannon kicked off the match. We were in possession of the first two scrums and it appeared that the packs were evenly matched and the scrums looked solid. Jack O’Donnell as strong as ever in attack and broke the gain line before being high-tackled, gifting Shannon a penalty. We kicked for touch and gained a penalty on Wesley’s 22, getting the ball out to the backs with the forwards taking on crash balls in support. A knock on left Wesley in possession of a scrum on their 5 and a collapse saw us penalised and Wesley kicked to their ten. Wesley got secure ball in the air and mauled from the line-out, driving up the pitch. The maul collapsed and Welsey knocked on, leaving us with a scrum just inside their half as we exited the first ten minutes of the half.

What followed was a fantastic scrum from Shannon, quick ball from Jack Stafford saw Fionn McGibney kick us deep. Wesley returned the kick and we launched a Garryowen back up, with Nathan Randles doing really well to get under and recover possession. We kicked for touch and some quick thinking in the following line-out saw us break the line and Jordan Prenderville went over for a great try, which went unconverted. We were up 5-0 after 14 minutes. From the kick-off, we gained a penalty for Wesley not rolling away and Fionn kicked us to half way for a line-out. Two minutes later, we were still in possession and moving the ball forward, across the pitch. We got another penalty for hands in the ruck and Stephen Fitzgerald kicked us to touch just inside the Wesley half. We secured the line-out and our forwards worked in pods to crash the ball over their 22. Tony Cusack made a great carry as the ball made its way to our backs. We gained another penalty and moved closer to the line when Welsey were put back 10 for indiscipline. Stephen Fitzgerald was on hand again to kick us to touch and we took a line-out on their 5. We were confident in the air and Riley Winter made sure we got clean ball to Jack Stafford who quickly got the ball out to the backs. Our forwards were covering fantastic ground in support and Conor Glynn did very well to get into position to run onto the ball at pace to shoot in over the line. Fionn McGibney converted, leaving the score 12-0 at the end of the first quarter.

Wesley kicked deep, into the waiting hands of Riley Winter. We took the ball up and Wesley managed to turn over, also gaining a penalty for Shannon offside. Their out-half took the penalty, driving the ball into our 5 for a Wesley line-out. They mauled and broke off the back in a pod, getting the ball to their out half who chanced a cross field kick which was well covered by Stephen Fitzgerald. Wesley gained back possession in the next phase and were still on the attack, using the space from sideline to sideline they brought the ball on. Our defense was solid and we didn’t let anything through, gaining a penalty for Wesley holding on, however this was reversed. Wesley tipped and went from this penalty and after two phases, Darrren Horan got a hand to the ball and powered over the line for Wesley’s first points of the match. This went unconverted and left the score 12-5 after 25 minutes. We kicked off from this and Wesley recovered, attacking in pods but knocked the ball on. We played on and used the advantage as we attacked in numbers. Wesley got in and turned over the ball, kicking deep. We returned the kick and they attacked back up the pitch, gaining a penalty in the process. Wesley kicked for the corner and gained a line-out on our 5. They retained the ball and mauled forward. They were patient at the back and waited until they saw a gap to peel off and go over the line for a try. This was converted and the match was all level 12-12 at 30 minutes.

We kicked deep from the kick off and Wesley recovered in the air. They set up a maul going forward and put up a Garryowen. Stephen Fitzgerald again got under the ball and kicked for touch. Wesley took a line-out and spread the ball wide. A Shannon turnover saw Will Leonard break the line, supported by Riley Winter who carried us over their 5. We spread it wide from the base of the ruck but were unfortunate to knock the ball on. Wesley were in possession of the scrum on their 5 and gained a penalty, allowing them to kick to just outside their 22. They mauled from the line-out but gained little ground, forcing their scrum half to kick the ball. We recovered and attacked through our backs, with Nathan Randles looking strong with his carries. We spilled the ball in contact and Wesely recovered, making a break and kicking ahead. Luke O’Dea recovered and found Will Leonard in support who took the ball up. Lee Nicholas was next to take on the Welsey defence and he brought us over the half way line. Wesley turned over the ball in the next phase and shifted the ball to their fullback who was well covered by Fionn McGibney. Wesley were in our 22 and attacking hard until they gave away a penalty for not releasing. Fionn kicked us to our 10 and we took a steady line-out. A break in play signaled the end of the first half with the score remaining level at 12-12.

Wesley kicked off the second half and we recovered, box kicking back. Wesley got under the ball and attacked forward, knocking the ball on in the process. We scrummed down in possession on our 22. Wesley managed to turn the scrum over and their 8 broke from the back, moving the ball towards our 5. Again, they knocked on and we took possession of the scrum. A solid scrum saw us gain a penalty and Fionn kicked us to inside our 10. Wesley stole the resulting line-out and the backs broke with cover from their forwards. We attacked the breakdown and turned the ball back over, Fionn kicking us to our 22. Wesley were in possession of the line out but Riley Winter poached the ball back our way, however it was short lived as we gave away a penalty for hands in the ruck. Wesley opted to kick for the posts and were successful. Taking the lead 15-12 at 50 minutes.

Two minutes later saw Wesley with a scrum on our 10, they picked and went from the back and ran into open space at pace. Our defence did very well to cover the attack as Wesley continued to pick and go from the rucks. As they edged closer to our line, Wesley shifted the attack and spread the ball wide to a waiting pod who powered over the line. The try was converted and Wesley increased their lead to 22-12. We kicked off and Welsey returned to Luke O’Dea who chipped ahead to their 22. They hit the front of the line-out and launched an attack out of their 22 gaining a penalty in the process, kicking to our 22. We turned over the line-out and Fionn got a great kick away to the Wesley 5. They knocked the ball on in the line-out and we took control of a scrum on their 5 as we entered the final quarter of the match.

The ball came back out of the channel and Keith Kavanagh did well to retain it. We reset the scrum and gained a penalty. Wesley pushed us back off the next scrum and their 8 picked and went from their line. Shannon were quick off the mark and applied enough pressure to force a Wesley kick to their 22. Welsey threw to the front of the line-out again and kept the ball tight, their scrumhalf kicked from the back of the ruck to Luke O’Dea who recovered and ran the ball back. Wesley were then shown a yellow card meaning they were down a forward for the next ten minutes. We used the penalty to kick to their 22. They disrupted our line-out but knocked on the ball gifting us a scrum on their 22. We got the ball out to the backs from this and Jack Stafford who was now in the center made a good break, supported by Jack O’Donnell. The ball was passed to the wing where a fantastic Luke O’Dea pass saw Nathan Randles fly over the line in the corner. Fionn McGibney landed a tough conversion to bring the score to 22-19 at 68 minutes.

We returned the kick-off but the ball went out on the full. Wesley then had a line out on the half way. Brian Downey got up and stole the ball, allowing our backs to take off in a gallop. We chipped ahead and Wesley recovered, keeping the attack tight. As we entered the final ten minutes, we were awarded a penalty for Wesley hands in the ruck and kicked to their 22 for a line-out. We made sure of the ball and got it to the backs all the way to the wing where Luke O’Dea took it into contact. Lee Nicholas was next to carry and he made the hard yards as the ruck formed over him. We were unfortunate to knock on in the next phase. After Wesley’s advantage ended we stole back possession and a lovely kick from Fionn McGibney brought us to the Welsey 22. They were in possession of the line-out and got eh ball to the backs who chipped through to Stephen Fitzgerald who took it back up. Wesley gave away a penalty for not rolling away and Stephen Fitzgerald kicked us to their 5. Ryan Healy took the ball at the front of the line-out and we launched an attack on the Wesley line. A pass back inside saw Lee Nicholas stopped just short and we continued to apply serious pressure to the Wesley line. We were held up going over the lien and were in possession of a scrum 5. Wesley stole the ball and attacked from the back where they were tackled into touch gifting us a 5-meter line-out. Ronan Coffey took the ball in the line-out and got to ground to set up a maul. The maul was trundling towards the Welsey line when our backs, realising the importance of the moment all piled in too and the 14-man maul drove Ryan Healy over the line where he touched down for our 4th try of the game!! Fionn McGibney stepped up and slotted over the conversion in the dying seconds of the match, from which we emerged victorious 26-22.

It was a nail-biting conclusion to a fantastic match. The lads dominated the first ten minutes and managed to come back from 22 unanswered Old Wesley points to emerge victorious and with a bonus point. The skill and determination shown by the lads on the day show the depth of passion and resolve that exists within the team. It was a fantastic day and a well-deserved result for the lads who have worked extremely hard over the past weeks. Onwards to this weekend and our local Friday-Night-Lights match versus UL Bohs. Come along for a look and support the lads in their attempt to turn this season around, you won’t be disappointed!!