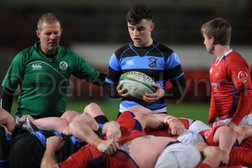 We welcomed UL Bohemians to Thomond Park for our second and final Friday Night Lights of this season. There was atmosphere aplenty as our pre-match meal set the ball rolling and our underage lined the pitch to welcome the teams out.

Despite the seasonal chill that is usual for this time of year the conditions were otherwise perfect as Bohs stepped up to kick off the match. An early knock on from Bohs saw Stephen Fitzgerald kick us to their 10 and another knock on saw us with a scrum on their 22. We gained a penalty at the scrum and Fionn McGibney was confident of landing the kick, seeing us take the lead 3-0 after 5 minutes. Bohs kicked off and we returned, gifting Bohs a lineout. They spread the ball to the backs off the top but dropped the ball in the next passage of play, Lee Nicholas was on hand to gather the spill and lead the attack up the middle of the pitch. We kicked and got touch gaining a line out on our 22, Fionn kicking us forward from the back. Bohs gathered and broke the line in a counter attack. The ball was shipped onto their center who again managed to slip through a gap but dropped the ball forward in a great chop tackle from Shannon. We took the scrum just outside our 22. Bohs got the better of us in this scrum with their hooker striking at the right time, sending the ball back and straight out of the scrum. Their scrumhalf gathered and chipped them through to the corner for a Shannon line out. We kicked ourselves out of pressure and it was a Bohs line out on our 22 at the end of the first ten minutes.

Bohs gained a penalty in the line out for Shannon pulling the man out of the air and Bohs opted for a shot at posts which was easily slotted over by Rick McNamara, leveling up the score to 3-3 at 12 minutes. We kicked off and Bohs sent the ball back, we gathered but misjudged our space and the ball went into touch. Bohs took the line-out and dropped the ball back, managing to recover and get the ball out to the backs who launched an attack in which we were penalised for coming up offside. Bohs then kicked to our 10 for the resulting line out. We turned the ball over in the next phase and got kept the attack tight through our forwards, gaining a penalty for Bohs coming in off their feet. Fionn made sure of a good kick to the Bohs 22. A crooked Shannon ball in the line out saw Bohs take possession and they kept it close, setting up a maul from which their out half was fed quick ball to kick them to their 10. We were back in possession in the line out and our forwards were offering fantastic support around the corner, with Captain Lee Nicholas in particular making solid carries. We were awarded another penalty on the Bohs 22 for a Bohs deliberate knock on and Fionn made another kick look effortless as the ball sailed between the posts, again putting us in the lead 6-3 after 18 minutes.

Bohs kicked off and we returned with Bohs gathering and attacking hard and using the side-lines as their attack moved on. They weren’t gaining much ground but were committing their forward pods to pick and go to try and break down our defence. We again gave away a penalty for off side and Bohs kicked to our 22. James Vaughan was forced off the pitch for medical attention due to a split replaced by Niall Mulcahy. We were in possession and mauled the ball from our line with Jack Stafford kicking us to our 22. We stole the resulting line out and Jack Stafford put up a box kick sending Greg O’Shea barreling down the pitch to tackle the Bohs player into touch. We attacked through our backs off the line out but were unfortunate to knock on allowing Bohs take possession of a scrum inside their half. Bohs gained a penalty in the scrum allowing them to kick to our ten for a line out after 25 minutes of play. Ronan Coffee managed to disrupt the Bohs line out and as a result, scrappy play saw them under pressure. We were quick off the mark and gained a penalty for Bohs holding the ball in the ruck, we kicked to inside their 22. We mauled from the line out and Duncan Casey peeled off the back. He was well covered but got the ball back to set up the next pod who took on the ball and made good ground. Our forwards continued to pick and go, bringing us ever closer to the try line. True to previous form, Conor Glynn got himself in position and barreled over the line for a fantastic try created from great forward support! Unfortunately, we missed the conversion but the score read 11-3 to Shannon as we closed off the first 30 minutes of the match.

We returned the ball back from the kick off and Bohs brought it back up and into contact. They kicked deep from the back of the ruck. A breakdown of communication saw us pass the ball into touch on our own 22. We stole the line out and Jack Stafford kicked us from the back of the maul. Bohs again brought the ball back up, knocking it on in contact, we took possession of the scrum situated just inside our half. After two resets in the scrum, Brian Downey picked and went and made great ground before linking up with Jack Stafford. We spread the attack wide but were again penalized for being offside on the Bohs 22. They kicked to our 10 and got clean ball to the backs from the top of the line out with their forwards covering well across the pitch until their out half kicked to our 22. We took the line out and kicked the ball back out, gifting Bohs a line out in the same spot. They mauled from the back and gained ground as it rolled forward, however, Bohs failed to use it upon the ref’s instruction and we opted to scrum on our 22. A penalty to us at the scrum saw Stephen Fitzgerald kick us to our 10. An overthrow in our line out saw Bohs recover and link up well with their backs who gained a penalty for an infringement at the breakdown. They opted to tip and go down the middle of the pitch, an attempted dummy form their out half was well read by Riley Winter who forced the turnover, signaling the end of the first half with the score reading 11-3 to Shannon.

Half time entertainment was provided by our fantastic u8s and u10s who lined out in freezing conditions for a quick game with some great rugby on display!

We kicked off the second half with Bohs recovering and opting to return but misjudging as the ball went in on the full. We threw into the line out and hit Lee Nicholas who got the ball to Fionn McGibney. We then gained a penalty which Fionn kicked to the Bohs 22. We set up a solid maul from the line out and kept up the momentum as it trundled on towards the Bohs line. Bohs were caught pulling the maul down and the ref awarded a penalty try to Shannon and a yellow card to Bohs. Fionn slotted over the Conversion and left the score 18-3 2 minutes into the second half. Bohs kicked off and the ball bounced off a Shannon chest, Bohs recovered and kept their attack tight and with the forwards in pods. Just two minutes later, they gained a penalty for Shannon not rolling away just left of the posts and Rick McNamara kicked it overs, 18-6 at 44 minutes. We kicked deep from the kick off and Bohs knocked on the ball in an attempt to recover. Bohs were down to seven in the scrum and a strong push from Shannon saw Jack Stafford get quick ball to Will Leonard who made a great break and linked up fantastically with Fionn McGibney to send him over the line in the corner. No conversion and the score read 23-6 to Shannon at 46 minutes. Bohs kicked off and this time Shannon knocked on, we scrummed down inside our half and gained a penalty for an infringement in the scrum.

We kicked but missed touch and Bohs returned gaining touch at our 10. A crooked ball in the line out saw us gain a scrum where we gained another penalty. We kicked to their 22 and Jordan Prenderville threw in a solid ball, hit Ronan Coffee and we mauled, breaking from the back. We attacked out wide with Jack O’Donnell looking strong in attack, carrying well and breaking the gain line. A pass didn’t go to hand and the ref called us back for an earlier knock on, seeing Bohs in possession on our 22. Again, we gained a penalty in the scum, with Fionn opting to kick for the posts. He was successful and the score read 26-6 at 54 minutes. Bohs kicked off and did well to get the ball back, however they knocked it on in the process. We were in control of the scrum just outside our 10, again we gained a penalty in the scrum and Fionn kicked us to their 10.

Bohs stole the line out and carried it in, knocking on in the process. We again scrummed down on half way with Shannon in possession gaining another penalty. We kicked to inside the Bohs 10 and a scrappy line out saw Bohs gain possession and a penalty, kicking to our 22. Bohs took the ball at the front of the line out and set up a sturdy maul which was gaining ground. Brian Downey was found guilty of coming in from the side and was issued a yellow card at 63 minutes. Bohs kicked to touch for a line out in the corner on our 5, the maul collapsed but Bohs retained possession and attacked through the backs. Another penalty for Shannon saw Fionn McGibney receive a yellow just two minutes after Brian Downey. Bohs opted to tip and go sending their second row over the line for their first try at 66 minutes. The try was converted leaving the score 26-13. We now had two in the bin and had to dig deep to halt any attack. Two minutes later and we were back in the attack, a high tackle on Stephen Fitzgerald saw Jack Stafford kick us to their 22. We retained possession in the line out and mauled on.

Niall Mulcahy broke form the back of the maul and carried us into their 22. Quick ball from the ruck saw Greg O’Shea come on at pace and go in for our fourth try and the all-important bonus point! Jack Stafford stepped up and landed the conversion leaving the score 33-13 at 71 minutes. Two minutes later Bohs were in possession of a line out on our 10 when the ref called crooked. We kicked ahead and gained another penalty when our player was pulled back. Fisticuffs saw in break in play as tempers flared. Four minutes later, Jack Stafford was confident of the penalty and put it over with ease gaining another three points, 36- 13 at 76 minutes. One minute later saw Bohs kick to our 5 and maul from the lineout, they drove on keeping the ball tight and a Shannon infringement saw them awarded a penalty try which was converted at 77 minutes leaving the score 36-20. As the minutes passed and the final whistle loomed a fantastic Stephen Fitzgerald intercept saw him run in a try all the way from our 22 for an impressive try. Jack Stafford converted with ease signaling the end of the match which saw Shannon win by a 43-20 score line!!