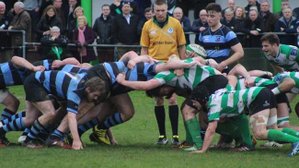 Photos and article taken from irishrugby.ie

Versatile back Peter Osborne celebrated his Ireland Club International call-up with a try and three conversions as Naas resumed their league run with a 21-14 win at home to Shannon.

The bad weather of the previous week, which forced the postponement of Naas' clash with Ballynahinch, seemed an age ago as this game was played on a dry, crisp day and, not surprisingly, a huge crowd turned up at Forenaughts.

Naas certainly came out fired up and within two minutes had a try on the board and fittingly it came from Osborne, who started at full-back time time. Having received the ball from Henry Byrce, who had made a great break in midfield, Osborne still had a lot to do, but he put in a clever chip behind the Shannon defence which he gathered himself and scored under the posts, adding the conversion soon after.

The next 20 minutes belonged to Shannon. The majority of it was played in the Naas half and the visitors were rewarded with two Ronan McKenna penalties before they took the lead. Naas centre Bryce received a yellow card for getting into an altercation with a couple of Shannon players and out-half McKenna slotted the subsequent penalty to put them 9-7 in front.

Johne Murphy's side now had to play the next ten minutes with just 14 men but ironically they enjoyed their most fruitful period of the match with two tries. On 29 minutes, after a spell on sustained pressure, winger Peter Howard shrugged off a couple of tacklers to score. Barely two minutes later, Osborne sliced through the Shannon defence before passing to Howard who sprinted clear to complete his brace in the corner. With Osborne firing over both conversions Naas led 21-9, a scoreline they took into the interval.

Eighth-placed Shannon, who were missing some of key backs due to Ireland Under-20 and Munster 'A' commitments, needed a good start to the second half and that is exactly what they got.

After winning a five-metre lineout, they formed a driving maul which a number of the backs joined. It was centre Will Leonard who was awarded the try after Tom Hayes' charges had forced their way over. McKenna was unlucky to see his conversion attempt come back off the post but his side were right back in the contest at just 21-14 down.

Surprisingly, though, this was to be the last score of the game. Naas tried everything to get a bonus point try but it just would not come, and to their credit Shannon put in a big finish that almost saw them secure a draw. It was not to be for the Limerick men, and Naas held on for a victory that sees them remain third in the table with just four matches remaining.