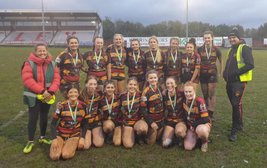 Shaw Cross Sharks U16 girls v South Leeds U16 girls
2nd July 2019
South Leeds had asked for us to move the game from Saturday to the Tuesday evening as they had a few injuries.
So, here we were on a sunny July evening to see if the current run of wins from the Sharks would continue
Kick off was delayed as the referee had to be replaced at short notice and kick off didn’t take place until 8:15
Spartans kicked off and the possession was fairly even for the first 5 minutes but on 8 minutes Lauren Mowatt made a trademark run and left Spartans in her wake to place the ball between the posts. Courtney Marsh (she had her own boots on for this game!) converted the kick.
Sharks had most of the possession now and seemed to be camped in the opposition half and three minutes after the first try Maya Briggs was on the end of a good series of passes along the line and scored in the left corner-Courtney was just short with her kick.
Four minutes later Lauren added to her points tally with a strong carry and effective fending off of defenders she managed to get the ball over the line.
Seven minutes before the end of the first half Courtney broke from the ruck that had formed on half way and ran the rest of the way to add to the Sharks score.
Half Time Sharks 18 Spartans 0

Just after kick off Spartans were awarded a penalty for a high tackle and pulled back 6 points after converting their try.
Sharks seemed to grow stronger after this and Lauren made a great catch at Full Back and ran 80 yards to place the ball casually between the posts for her hat trick of trys.
Jess Harrap took a turn at the tee and converted the try with a good kick.
Jess got her name on the Tries scored list soon after again after a good show of passing out to the wing.
The Spartans were showing the effects of their injury problem aas Sharks scored another try, this time Courtney Marsh scored her second try of the game with a weaving run over 40 yards.
Sharks made certain of the game and improved their points difference when Lydia Fawkes went over for a try and Courtney converted in the last minute.
Full Time Sharks 38 Spartans 6

A good game for the Sharks, again displaying team work and individual skill

Next game at home against Orrell
KO 11:30 at Shark Park