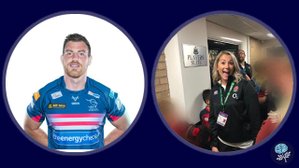 I sincerely hope that you are all keeping safe and well during these difficult times?

Despite the fact that last season finished early and next season looks like starting late we are still planning ahead to ensure that once rugby returns the club is in the best possible position it can be to be successful in whatever format the season takes and at all levels within the club.

I am sure you will have seen the announcement about the remaining senior men’s first team squad who have all decided to contribute their playing fees back into the club to ensure that we can continue to be successful and viable over the next year, this is a fantastic gesture by them and as a club we should be rightfully grateful to them, if anyone has a business or contacts that would like to sponsor a squad number next season please get in touch as this would be a fantastic way to show our gratitude, I am claiming the number 3 shirt to remind me of my own playing days!

As part of the clubs ongoing development the committee have voted unanimously to further support the ladies section with their push for promotion back to the Championship with the appointment of a new head coach, and a huge thanks to Kate Williams who stepped up last year to fulfil the role.

The men’s section are losing the coaching services of club stalwart Nick Crapper who has decided to hang up his coaching boots and as a club we owe Nick more than we could ever repay in terms of the time and effort he has put in as a player and coach over the years, and we wish him all the best and hope to be seeing him regularly watching his son who will undoubtedly be pushing for a first team place next season as he has agreed to carry on with his first team match day duties.
We are therefore delighted to announce the two following appointments to the club:

Clarissa is already a well-known coach in the Yorkshire Region as her daytime position is as a Community Rugby Coach for the RFU in West Yorkshire.
She is a long time player at both Sunderland and more recently Harrogate Ladies from where she will already be known to some of the senior ladies players, she is now however committed to a coaching rather than playing role and getting involved with the girls sections to ensure that their transition over time into senior rugby is a smooth one.
She has previously been U18’s Head Coach at both Houghton Rugby club and the centre of excellence at Darlington Mowden Park as well as coaching the senior men at Baildon Rugby Club.

Clarissa is a Level 2 Qualified Coach and is keen to work with Adam Byron and move towards her Level 3 qualification.

We are delighted with the appointment and I’m sure all of the players and members will join with us in wishing Clarissa and the ladies every success next season.

We are delighted to announce the appointment of Matt Smith as assistant men’s coach to work closely alongside Adam Byron in developing the senior men to once again push for promotion.

Matt is a well known local player who has spent most of his playing career at Yorkshire Carnegie and is now part of the first team at Doncaster Knights, he previously played at Cornish Pirates and between the three clubs has amassed over 200 Championship games.
He previously played representative rugby for both England Students and Yorkshire at all age grade levels.

He grew up playing his rugby at Sandal but we won’t hold that against him!
Matt is also a Level 2 qualified coach who is working towards his Level 3 and has previously coached at Old Brodleians, Silcoates School and 2 seasons as Rotherham Titans forwards coach, so already has a huge amount of experience at a senior level.

As with Clarissa I am sure all players and members will join with me in wishing Matt every success in his new position.

As you can see, we are working hard as a committee to ensure that once we can get back on the field the club at every level is in the best position it can possibly be in.
We hope to see you all soon, but in the meantime, stay safe.