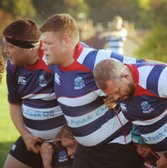 The 3rd XV ensure that Sheff still have a team in action this Saturday...

Despite the disappointment of the Cup cancellation for the 1st XV, there are still plenty of fixtures taking place around the club.

The undefeated 3rd XV are now the only team fulfilling a fixture on Saturday, as they make the short trip across to Dronfield RUFC to take on their 2nd XV.

The 3s will still be full of buoyancy and confidence as they brushed aside Dinnington last time out, in a convincing 36-12 home victory. Unfortunately, their proposed game against Hemsworth 2nd XV last week had to be cancelled due to the unavailability of a suitable referee.

The Sheffield boys will feel that they have every chance of continuing their impressive run, against a team that has had a somewhat up-and-down season, with four wins, two losses and a draw on their record; albeit these games were played against a very high standard of opposition.

There will be the usual culprits in action for Sheff, as the ever-reliable Richard Hague will be joined in the pack by consistent performers James Annis and Joel Civico, as well as the impressive Connor Adams added considerable size to an already formidable pack.

In the backline, Ben Broomhead, Vinny Griffiths, Steve Kearnsey and Ben Collar have all offered threat with ball-in-hand throughout the season.

The game kicks off at 1.00pm, so plenty of time to get there and back to Abbeydale for the England International.