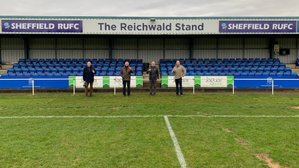 By Callum Robinson
3 days ago
Share via
FacebookTwitter
https://www.pitchero.com/clubs

During 2019 (aka 1 BC) our club suffered the loss of too many former stalwarts. The road to Hutcliffe Wood was too well-trodden. After one of those sad events, Chairman Andrew Langdale had an inspirational thought. Why did we have to wait until a funeral to celebrate and find out more about friends who had contributed so much to the club? Why didn’t we honour some of them whilst they were still here, particularly in what was our centenary season at Abbeydale? As everyone knows, that planned celebration had to be postponed because of Covid but we’ve decided to go ahead anyway with honouring some very worthy recipients.

Everyone Andrew talked to immediately saw the merit of his idea. The choice of who should be honoured was equally obvious and unanimous. Even a cursory glance at the honours boards in the President’s room leaves no doubt about the identity of one family who richly deserves such recognition.

John Reichwald had finished an illustrious playing career for Rosslyn Park before moving his family to Sheffield in 1959. He never actually played for us but the influence he and his two sons were to have would hardly have been believable at the time. By the time I arrived in 1977, John had become a key part of running the club, modernising its structure to enable us to be competitive in a changing rugby world. He was the club’s first Chairman and later, from 1979 through to 1982, a hugely respected President during some of the club’s best playing years. My recollections from those days are of a ready smile, a very distinguished presence, and a mischievous twinkle in his eyes. People worked for John because they wanted to.

If John never played for the club, his boys certainly made up for that omission. The statistics are, by themselves, quite astonishing. Between them, Andrew and Bill played 817 first team games over a twenty-year period, with Bill captaining the side 372 times. The Reichwald surname appears on our honours boards no less than eighteen times – seven Presidencies and eleven (and a half!) Captaincies.

Yet those statistics tell only a fraction of the full story.

Elder brother Andrew played 302 times. He was a silky, intelligent centre whose lines of running - with the ball and in creating space backing-up - were a joy to behold. His timing of a pass made many of our wingers look good whilst his perfectly executed tap tackle often did the reverse for our opposition. President in his own right, instigator of the 100 Club tie for over 100 first XV appearances, administrator of the fund-raising 400 club, under-acknowledged match day and background helper, but most of all club historian and record-keeper extraordinaire. Andrew quite literally wrote The Book – well, actually, two books on the history of Sheffield RUFC!

Two memories stand out for me amongst many others. Firstly, the day not long after my playing time at Sheffield was over when a large brown envelope appeared in the post. Unusually for such vessels, the contents were a pleasant surprise. A record of every game and every playing partner for my whole Sheffield career. Many have shared similar, hugely valued, experiences.

My second memory is rarer and may even be unique. It’s the one and only time I’ve known Andrew to get his history wrong! Chatting with Scott Hastings at the bar during a Wooden Spoon dinner, the great Scotland and Lions centre started to tell us about the time he’d played against Sheffield for Northern. Andrew quietly told me, ‘no he didn’t, he’s bull*****ing!’. However, having gone and checked his records, he was then man enough to admit his rare lapse with good grace.

Bill was temporarily absent from the club having a glamorous sojourn with Leicester Tigers when I arrived. He soon returned, however, to play outside Alan Old in a formidable midfield unit along with brother Andrew. The next season he became captain again (having first filled that role between 1975 and 1977). He and coaching supremo Neville Jones shared the same core rugby philosophy. Attract and motivate strong personalities, play smart rugby based on what’s in front of you, and take it to the opposition at every opportunity!

It’s no coincidence that during those times the club arguably played some of its best-ever rugby against a wide array of formidable opponents. Success followed - in the pre-cursor to Leagues Northern Merit Table; against the likes of Saracens, Exeter and Richmond from further afield; in Level 3 when the Leagues began, and our first two appearances in the then fiercely competitive Yorkshire Cup final (sadly losing out both times to an excellent Wakefield). Bill’s role in achieving all this is difficult to overstate. His many caps for Yorkshire and a Barbarians shirt demonstrate that, as an attacking player, he had few equals. His combination of pace, handling skills, guile and intelligence, coupled with a robust hand-off left many an opponent floundering. He even tackled occasionally…

For those who played regularly with Bill, it was his captaincy that outshone even that playing ability. Demanding of high standards, clear in his expectations, flexible and adaptive in his thinking on and off the field, Bill’s pre-match team talks were legendary. Equally, a few unfortunate bar-chatters and training ground Tarzans found to their cost that Bill wasn’t someone to suffer fools – or over-puffed wannabes – lightly! ‘Get some games in…’ was the stock, terse response.

When he eventually retired in 1995 after 515 games, he became Director of Rugby, has had two separate stints as President and has been instrumental in raising thousands of pounds for the club. He even had a pivotal role in organising, building and funding what this season is being re-named, with absolute justification, the Reichwald Stand!

A Note from Andrew and Bill Reichwald:

We would like to say thank you to the chairman, the committee and all members for the wonderful honour given to our family – and to Nigel for his words.

Both of us and our dad have had huge enjoyment from Sheffield RUFC and feel very fortunate and proud to have been recognized in this way. We were lucky to have played for the club during its most successful period and with some fantastic players. All of us gave it all we’d got and the result was highly competitive and committed Sheffield teams, an ability to enjoy every aspect of rugby and lifelong friends.

Since then it has been a pleasure to follow the team at whatever level we have been competing, to see such effort on behalf of the club by so many, both on and off the pitch, and to follow its development in every aspect.

We will continue to serve the club as best we can in the future.

Thank you very much,
Andrew and Bill