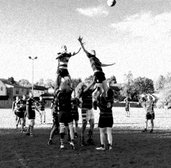 The 3rd XV are at Home on Super Saturday

The 3s will look to continue their amazing run on home soil this weekend...

The 3rd XV bandwagon rolls on at Abbeydale this weekend! Local rivals Dinnington are the opponents, and will offer a stern test for a side that has brushed away all-comers over the start of this season.

Last week saw The Sheffield History Society pose threat aplenty to the boys, with Sheffield finding a resistance and resolve that hasn’t really been tested this season. They will be stronger for it, as they continue to develop and grow as a team.

Dinnington historically offer a tough and feisty fixture, something that Sheffield will be wary of. Their will undoubtedly be a battle amongst the forwards, a prospect that Sheffield will savour, with James Annis, Miles Bates and Richard Hague on sterling form up front.

The backline has shown plenty of promise as well, with Ben Broomhead consistently troubling the scorers, amongst other standout performers, Steve Kearnsey and Steve Connelly. They will also be supplemented this weekend by 2nd XV regular Ed Anglin, who will offer plenty of power and pace from the midfield.

This will be a game of real quality and ferocious competition, with both teams expecting the other to offer fire and confrontation throughout the squads.

If you’re unable to make the journey to Newport (Salop) or Wharfedale then there is still plenty of entertainment to be had in the surroundings of Abbeydale. Get down and support the boys this Saturday!